We’ve already seen that Freeport-McMoRan’s (FCX) cash operating margins for its energy business improved in 2Q15 compared to the previous quarter. Even though the margins have improved from 1Q15, they’re still a far cry from what Freeport enjoyed last year.

In this part of the series, we’ll take a look at Freeport-McMoRan’s leverage ratios, which went up sharply after the company acquired the energy assets. 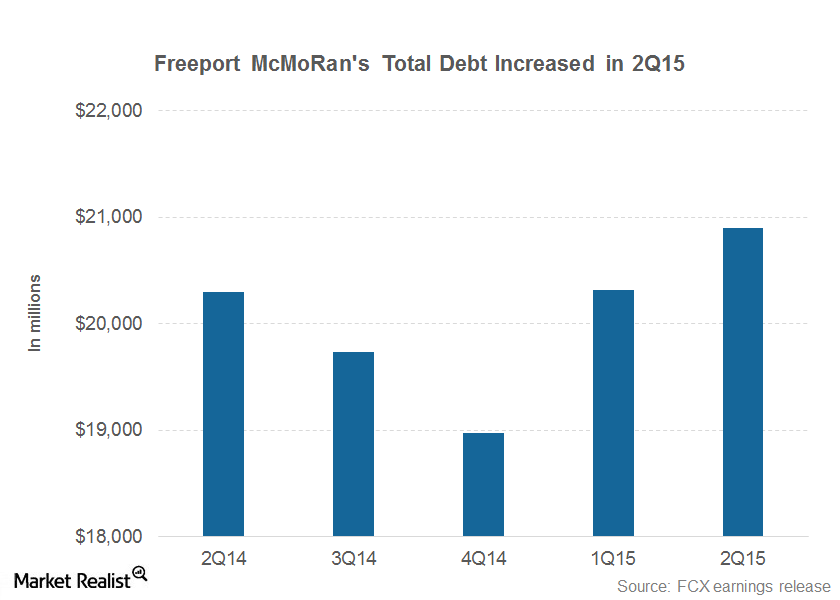 Freeport’s net debt was negative in 4Q12. This basically means that the cash on Freeport’s balance sheet was more than its borrowings. However, Freeport had to borrow heavily to acquire these energy assets. This increased its debt levels. Freeport’s debt ratios are currently much higher than other copper producers such as Southern Copper (SCCO) and Teck Resources (TCK).

The above graph shows Freeport’s total debt over the last few quarters. In 2Q15, its total debt went up $600 million and reached $20.9 billion. It ended the quarter with total cash of $466 million, which appears to be on the low side. After the recent correction in its share price, Freeport’s market capitalization is ~$12.6 billion.

Freeport was planning to reduce its debt levels. Lower crude oil prices have changed the equation. It has had to defer its debt reduction targets since commodity prices fell. It also had to slash its dividend by more than 80% in a bid to reduce cash outflows.

Freeport is investing in several growth projects that are leading to a cash burn. In the next part, we’ll discuss some of Freeport’s major expansion projects.