On July 1, 2015, ACE (ACE) announced the acquisition of Chubb (CB) for a combination of cash and shares amounting to $28.3 billion. In this biggest-ever deal for the insurance industry (XLF), ACE has valued Chubb’s outstanding shares at $124.13 per share. ACE, led by Evan Greenberg, made a bid that valued Chubb at a 30% premium to its market value the day before the transaction was announced.

The deal will create the second-largest listed property and casualty insurer, by market capitalization, in the US. In a statement issued by both companies, it’s noted that ACE will own 70% of the company after the transaction closes, and that Greenberg will lead the combined insurer. 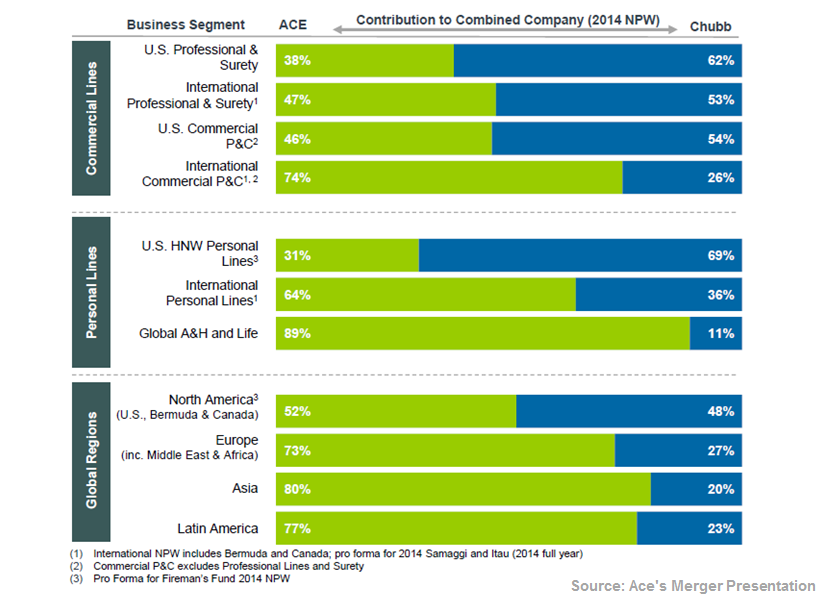 ACE Limited is a global insurance and reinsurance company. It offers commercial insurance products and services, such as risk management programs, loss control and engineering, and complex claims management. The company operates under five segments:

It reported total revenues of $19 billion in 2014, with net income of $2.85 billion. ACE provides specialized insurance products to niche areas such as aviation and energy. The company also offers personal lines of insurance coverage:

The Chubb Corporation is a holding company whose subsidiaries are principally in the property and casualty insurance business. It reported total revenues of $3.47 billion in 2014, with net income of $375 million.

These are two other major transactions in the insurance sector: