In the United States, there were 221 natural gas rigs operating in the week ending June 12, one less than in the previous week.

Among the major resource shales, the Marcellus and the Utica shales lost natural gas rigs last week. These losses were partially offset by an increase in the Eagle Ford Shale rig count. 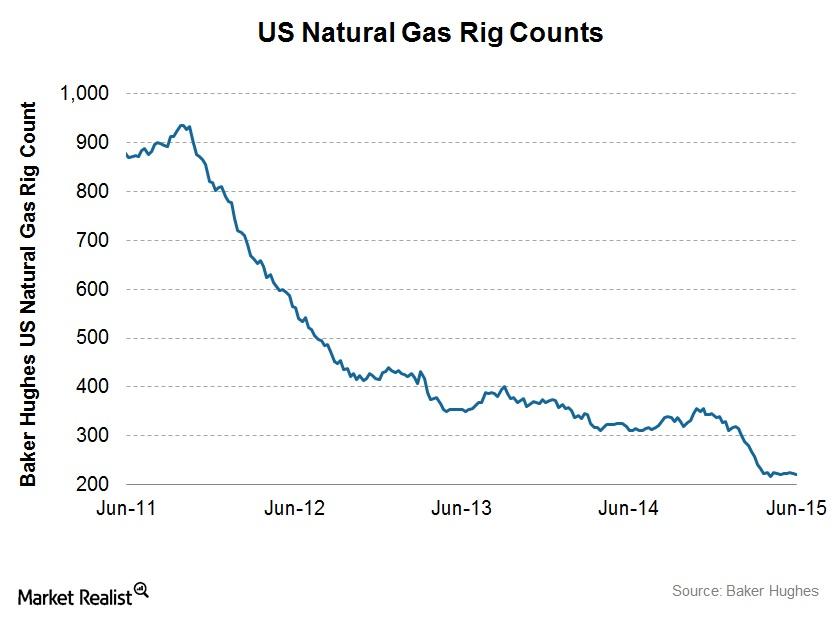 A reduced number of natural gas rigs in operation suggests that natural gas producers like Ultra Petroleum (UPL), Newfield Exploration (NFX), Linn Energy (LINE), WPX Energy (WPX), and Pioneer Natural Resources (PXD) are reducing their drilling activities. This could mean a slowdown in production growth or even a production decline. A turnaround in the number of rigs in operation indicates the opposite, which would be positive for these companies. WPX Energy accounts for 0.16% of the iShares U.S. Energy ETF (IYE).

Natural gas rigs have been on a downward trend for about four years. The number of active natural gas rigs also decreased over the last 12 months. A year ago, there were 310 natural gas rigs in operation. Currently, there are 221 rigs. That’s a decrease of 89 rigs, or ~29%.

In the 12 months to June 12, 2015, the Haynesville Shale and the Marcellus Shale reported most of the decline in active natural gas rigs. The number of gas rigs decreased by 40% and 22%, respectively, in these regions. In the past year, the Eagle Ford Shale added 12 rigs to its natural gas rig total, the most of any shale play in the United States.