In this article, we’ll look into the net-debt-to-EBITDA ratios of some integrated companies such as ExxonMobil (XOM), BP (BP), Royal Dutch Shell (RDS.A), and YPF (YPF), four diverse names in the integrated energy sector in 1Q15. The measure indicates a company’s ability to repay debt by looking at its earnings before interest, tax, depreciation, and amortization (or EBITDA).

Net debt is total debt minus cash, cash equivalents, and short-term marketable securities. For similar discussion on upstream companies’ debt, read Market Realist’s Have US oil and gas companies leveraged themselves out? 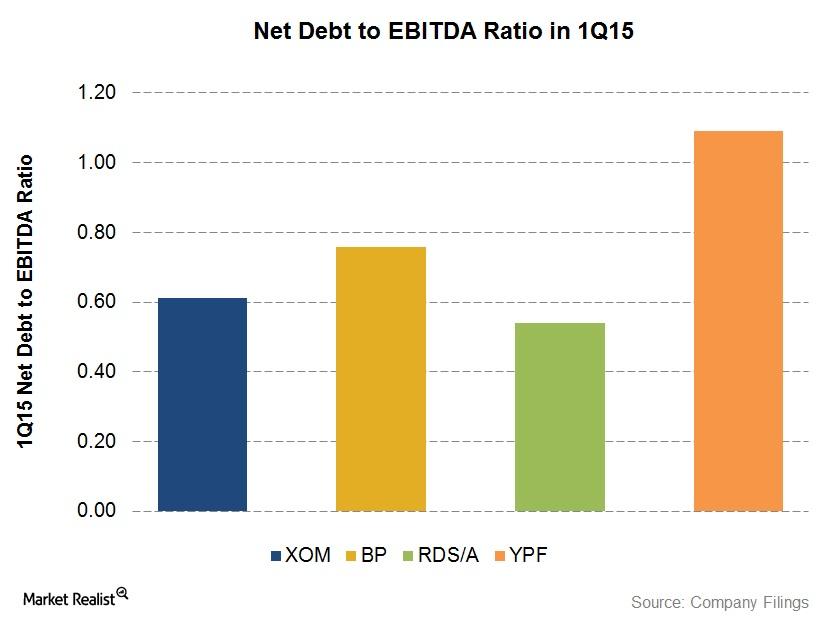 Royal Dutch is the least leveraged

In 1Q15, ExxonMobil’s (XOM) net-debt-to-EBITDA ratio stood at 0.61. Its 1Q15 long-term borrowing increased 61% from 1Q14, while cash and near-cash items decreased 7.4%. ExxonMobil used part of the proceeds from 1Q15 long-term debt issuance to reduce short-term debt. The company’s TTM EBITDA also decreased 20% during the same period. ExxonMobil makes up 15.1% of the Energy Select Sector SPDR ETF (XLE). It is also makes up 1.9% of the SPDR S&P 500 ETF (SPY).

In 1Q15, BP’s (BP) net-debt-to-EBITDA ratio stood at 0.76. The company’s net debt remained manageable, as a 10% increase in long-term borrowing in 1Q15 from 1Q14 was partially offset by a 19% increase in cash and near-cash items. The company’s TTM EBITDA decreased 3% during the same period.

YPF is the most leveraged