CSX’s (CSX) Intermodal division competes and provides an alternative to transporting freight on the highways using trucks. Its network connects all of the major population centers east of the Mississippi River. It’s over 90% cleared for the use of “two containers high” intermodal movements. This allows the company to capture a significant share of the incremental domestic intermodal market—estimated at 9 million truckloads in the eastern US that move over 550 miles. 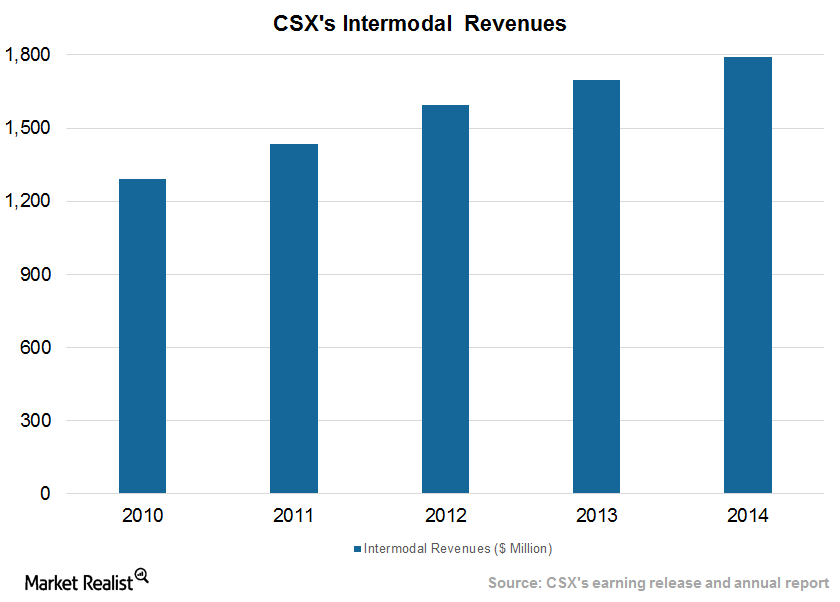 CSX’s Intermodal division contributed $1.8 billion to the company’s total revenue. The division expanded at a CAGR (compound annual growth rate) of 8.5% over the past five years. To further support the growth, CSX is building new terminals and increasing its network capacity to broaden its market presence in key growth areas. CSX started its Northwest Ohio intermodal terminal operations in 2011. It was expanded more in 2014. The expansion enables service offerings to customers, reduces interchanges in Chicago, improves market access to and from East Coast ports, and enhances the network’s fluidity.

In 2014, CSX opened terminals in Winter Haven, Florida, and Quebec, Canada. It’s also planning to start construction on a new terminal near Pittsburgh, Pennsylvania, in 2015. This will enhance its intermodal reach and support future growth.