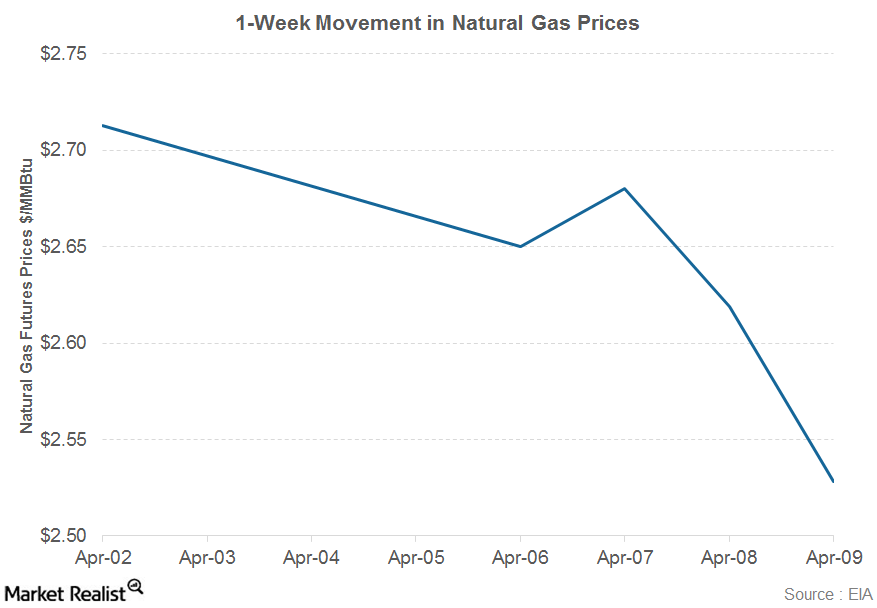 On Tuesday, natural gas prices rallied as forecasts turned cooler. MDA Weather Services forecast that temperatures would likely remain below normal across the majority of states east of the Rocky Mountains from April 12 to April 21. Prices advanced 1.1% to $2.68.

The rally was short-lived because prices declined the next day by~2.3% to finish at $2.619.

Reacting to a larger-than-expected build, prices fell again on Thursday following the release of a bearish EIA (U.S. Energy Information Administration) inventory report. Prices decreased by ~3.5% to settle at $2.528. For more on the EIA report, refer to Part 2 of this series.

While natural gas demand is high during the winter, hot temperatures during the summer can also cause demand to increase. Power stations use more fuel to power cooling devices like air conditioners. This can reduce storage buildup during injection season, which is also bullish for natural gas prices.

Pricing changes drive short-term movements in the stock prices of natural gas producers such as Cabot Oil & Gas (COG), Range Resources (RRC), Devon Energy (DVN), and Chesapeake Energy (CHK). Also, since all of these companies make up 5% of the Energy Select Sector SPDR ETF (XLE), these trends affect the ETF as well.