Vale (VALE) copper production in 1Q15 totaled 104,600 tons. That’s up 1.5% over 4Q14 and 21.7% over 1Q14. This is a quarterly production record for Vale. Vale has copper operations in three main regions. In this part of our series, we’ll discuss Vale’s copper production results by region. 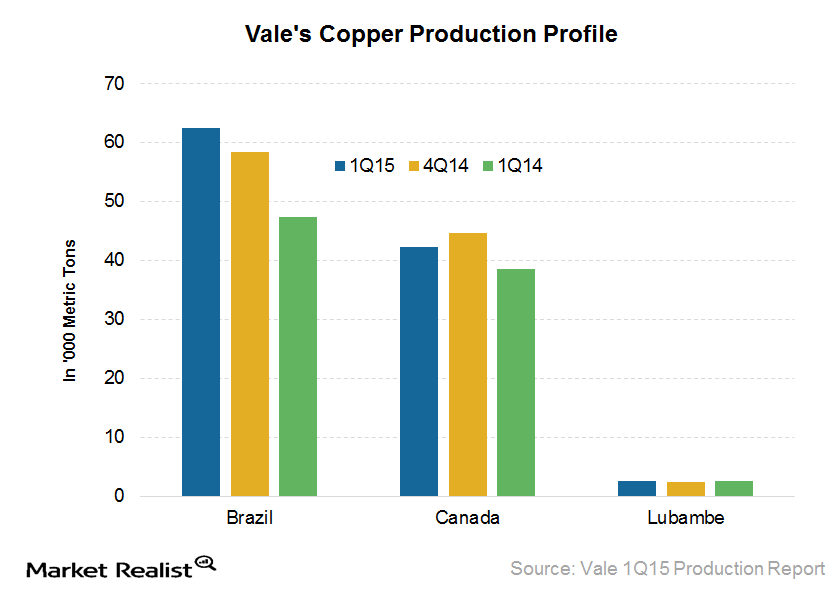 Vale operates the Sossego and Salobo mines in Brazil:

In Canada, Vale operates mines in Sudbury and Voisey’s Bay. Sudbury produced 25,300 tons, and Voisey produced 7,500 tons. Voisey’s Bay production was 34.4% lower than in 4Q14, mainly due to unplanned maintenance in January.

Vale’s Zambian joint venture, Lubambe, is ramping up and delivered a total of 6,400 tons of copper in concentrates. Of this total, 2,600 tons are attributable to Vale.

Teck Resources (TCK) reported its first-quarter results on April 21. The company’s copper volumes were less than expected in 1Q15, mainly due to the timing of shipments. Southern Copper (SCCO) is expected to report in late April. Freeport-McMoRan is due to announce its first-quarter results on April 23, 2015. FCX forms 4.1% of the SPDR Metals and Mining ETF (XME), which invests in diversified metals and mining companies.