Rio Tinto’s (RIO) 1Q15 Pilbara iron ore production was 71.1 million tons (Rio’s share, 57.3 million tons). It was 12% higher than 1Q14. First quarter 2015 production was 6% lower than the fourth quarter of last year. The main reason of the decline was the impact of wet weather throughout the quarter.

Pilbara’s 1Q15 sales were 69.3 million tons (Rio’s share, 55.4 million tons), which were 8% higher than 4Q14 but 12% lower than 1Q14. The company noted that this was a result of weather impacts from Tropical Cyclone Olwyn and a train derailment that temporarily blocked the inload train circuit at Dampier. 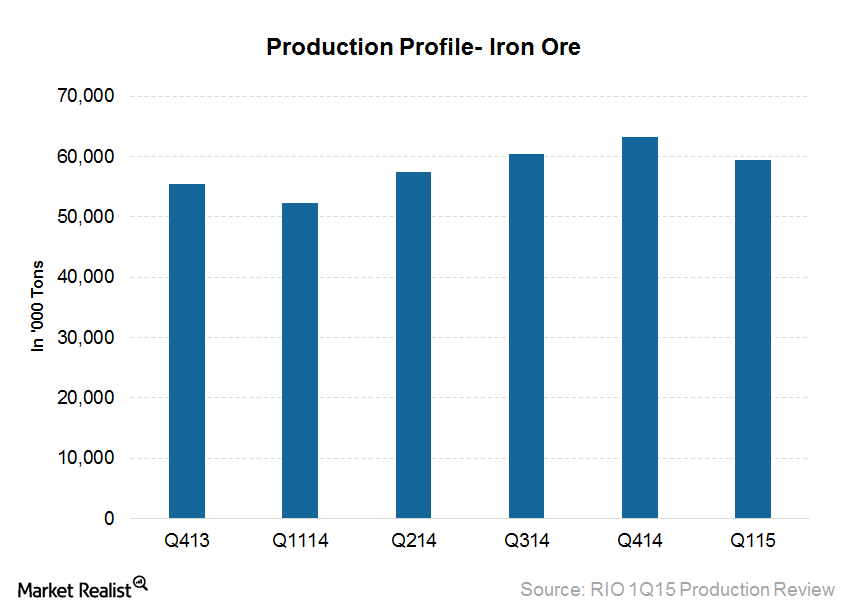 Iron Ore Company of Canada (or IOC) produced 3.6 million tons of pellets and concentrate, and shipments of 3.1 million tons were in line. Operational improvements offset the impact of weather compared to last year.

Rio’s Pilbara expansion infrastructure is nearing completion and remains on track for delivery by the end of the first half of 2015. Rio maintained that all its major rail, marine, and wharf works are in place.

Rio Tinto maintained its previous guidance for iron ore global shipments, approaching 350 million tons (100% basis) from its operations in Australia and Canada. Rio noted that as part of the ongoing efficiency program, inventory drawdown will be used throughout the year to maximize cash flows. According to the company, shipments and production are each subject to weather conditions.

Since Rio has maintained its production target for iron ore, the production and shipments are now expected to be second half weighted.

Iron ore prices hit a decade low of $47.08 per ton on April 2. This is mainly due to supply glut created by iron ore miners, including BHP Billiton (BHP), Rio, Vale (VALE), and Fortescue Metals Group (FSUGY). Oversupply coupled with weak demand from China, which constitutes two-thirds of the overall seaborne demand, is leading to an unprecedented fall in iron ore prices. This is hitting relatively smaller companies such as Cliffs Natural Resources (CLF) with high debt. CLF forms 3.7% of the SPDR S&P Metals and Mining ETF (XME).