On April 10, 2015, The Wall Street Journal reported that Symantec (SYMC) is considering selling its data-storage business, Veritas. Symantec shares rose by ~8%, possibly on news from the Dow Jones Newswire that the company’s storage software unit—Veritas—could earn more than $8 billion. Veritas is rumored to account for half of Symantec’s market cap of ~$17.5 billion. 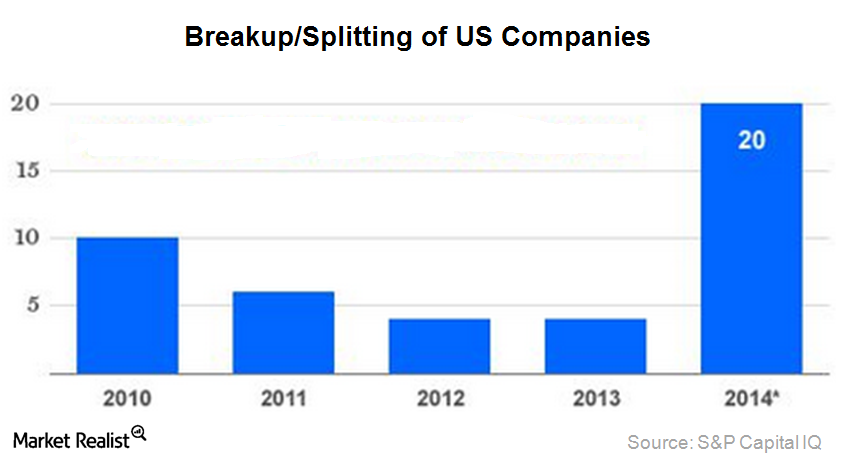 To gain diversified exposure to Symantec, you can invest in the iShares U.S. Technology ETF (IYW). IYW invests about 0.45% of its holdings in Symantec.

In the chart above, you can see that in 2014, 20 US corporations announced or completed deals to split themselves up. That’s more than in the last three years taken together. HP (HPQ) and eBay (EBAY) are among those that announced their decision to split up into separate companies in 2014.

The possible sale of Veritas may be a substitute plan for an earlier company announcement that it would split itself up. According to the same Wall Street Journal report, Symantec has met officials from NetApp (NTAP) and EMC (EMC), along with some private equity firms, to ascertain the interest in Veritas.

Symantec–Veritas is another example of how difficult it is to create synergy after a merger or buyout. According to a Harvard Business Review paper published in 2011, “Study after study puts the failure rate of mergers and acquisitions somewhere between 70% and 90%.”