Natural gas futures for June delivery show a falling wedge pattern. Prices broke out of this pattern on April 29, 2015. The renewed demand due to the hot summer was the key catalyst that drove gas prices yesterday. The EIA (U.S. Energy Information Administration) will release the natural gas inventory report today. The inventory data would be the key driver of gas prices today. 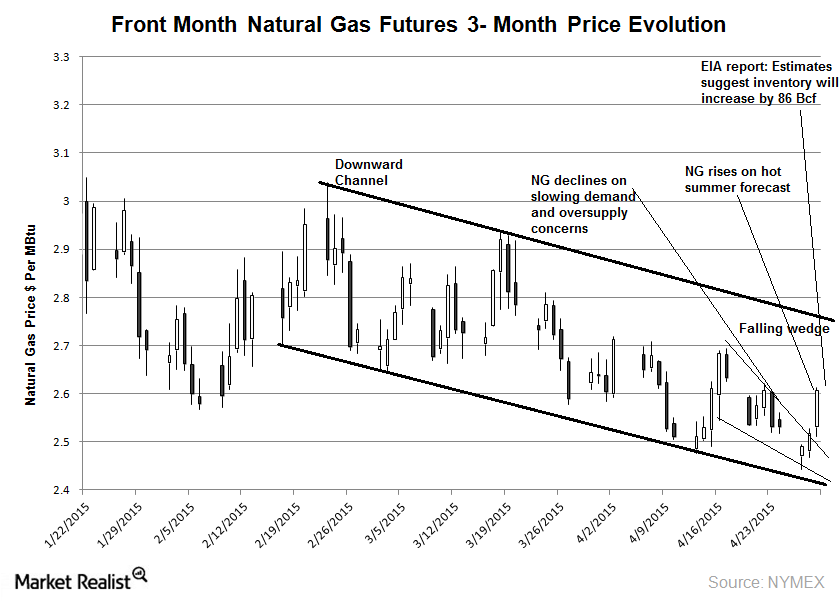 Gas prices continued to rally for the second day. The short-term demand spike could push natural gas prices to the nearest resistance of $2.75 per MMBtu (British thermal units in millions). Prices hit this mark multiple times in March and April 2015. In contrast, the long-term downtrend will continue to drive natural gas prices to the key support of $2.40 per MMBtu. Gas prices tested this mark in May 2012. The consensus of rising inventory will drive gas prices lower.

Natural gas prices are trading below their 20-day moving average of $2.62 per MMBtu as of April 29, 2015. June and July natural gas futures contracts are trading above their five and ten-day average volume. The falling wedge pattern could drive gas to the nearest resistance.