In 4Q14, Magnetar Capital ended its position in Baker Hughes (BHI) by selling its remaining 1.3 million shares in the company. The position had accounted for ~1.5% of the fund’s third-quarter portfolio. 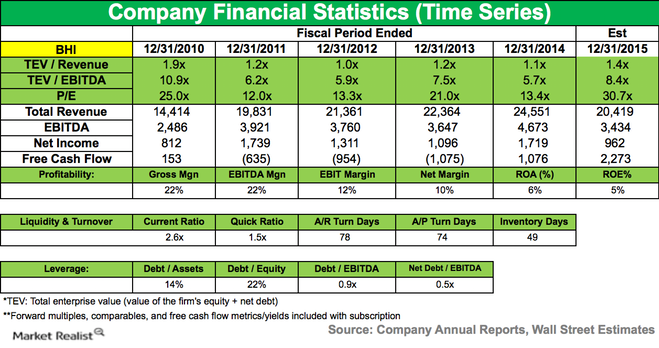 Baker Hughes is a leading supplier of oilfield services, products, technology, and systems to the worldwide oil and natural gas industry. The company also provides industrial products and services to downstream chemical and midstream energy companies. The company operates in more than 80 countries and has five segments:

In 2014, North America contributed almost 50% of the company’s total revenue.

Once the deal is complete, Halliburton expects cost synergies of $2 billion per year. If the deal gets canceled, Halliburton agrees it would pay $3.5 billion to Baker Hughes.

Baker Hughes and Halliburton held a shareholder meeting on March 27 in connection with the pending acquisition.

To deal with the current oil downturn, Baker Hughes and its peers are trying to reduce operating costs. In its 4Q14 earnings release, Baker Hughes announced that it would cut 7,000 jobs. This job cut represents 11% of its current 62,000 global workforce. The job cuts are expected in 1Q15.

Baker Hughes reported revenue of $6.6 billion this quarter—up 6% sequentially. Its earnings were driven by strong demand and increased activity in some regions including Canada, West Texas, the northern Persian Gulf, North Asia, and Australasia.

GAAP (generally accepted accounting principles) net income was $663 million or $1.52 per diluted share. This was up 77%. Baker Hughes increased profitability with improved pricing and use in its US pressure pumping business. The increased contribution from the Gulf of Mexico and Canadian markets also boosted the company’s profitability. In 4Q14, free cash flow was $838 million.

In the next article of this series, we’ll look at Magnetar’s position change in Denbury Resources (DNR).