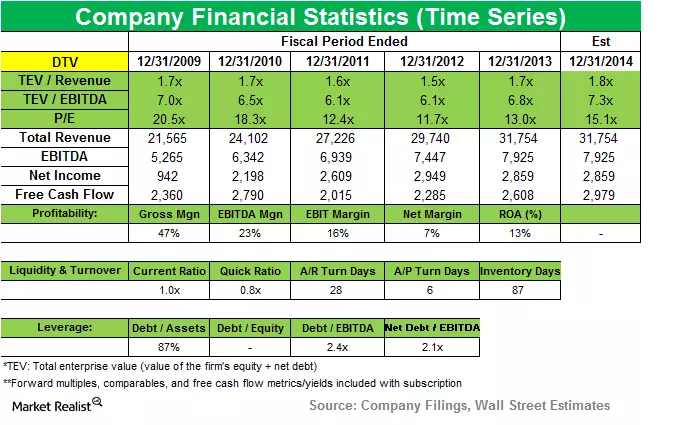 Update on the merger between DIRECTV and AT&T

DIRECTV announced earlier that it’s entering into a merger deal with AT&T (T) that will create a leading content provider across broadband, video, and mobile platforms. This combination will bring together two major companies that possess complementary scale and strengths in broadband, video, and mobility services. The combined entity will be appropriately positioned for meeting the evolving needs of consumers within the broadband and video segments.

Mike White, president and CEO (chief executive officer) of DIRECTV, stated, “Our fourth quarter results, although marked by challenging macroeconomic conditions in Latin America and a conscious decision to reinvest in our U.S. business, capped off another strong year of operations for DIRECTV….2015 will bring additional challenges to our businesses, but given our solid continued operating momentum and the pending merger with AT&T, I am confident that we will continue to drive value for our shareholders for the foreseeable future.”

In December 2014, DIRECTV and The Walt Disney Company (DIS) announced an agreement that will offer DTV customers access to Disney’s expansive list of top quality news, sports, and other entertainment content across televisions, tablets, computers, and other devices. This deal will complement DIRECTV’s goal as well as Disney’s goal to deliver the best content in video across various platforms.

DIRECTV is a provider of digital television entertainment in the United States and Latin America. It operates two direct-to-home (or DTH) business units: DIRECTV US and DIRECTV Latin America.

DIRECTV Latin America owns approximately 93% of Sky Brasil, 41% of Sky Mexico, and 100% of PanAmericana. DIRECTV’s Latin American business is the leading pay-TV provider in the region with more than 18 million subscribers, including all Sky Mexico customers. The region has an underpenetrated pay TV market with about 40% of households subscribing to pay TV. The region also has a growing middle class, which is DIRECTV’s fastest-growing customer segment.

In the next part of this series, we’ll cover OZ Management’s boosted position in CDK Global Inc. (CDK).