On April 1, the EIA (US Energy Information Administration) reported that crude inventories increased 4.8 million barrels (or MMbbls) in the week ending March 27.

The build was slightly more than analysts’ expectations of a 4.2 MMbbl increase. 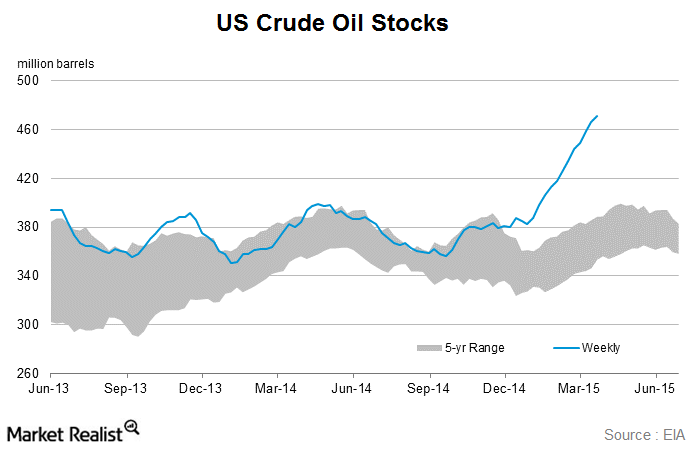 US commercial crude inventories now stand at ~471.4 MMbbls, setting another all-time record high. Inventories surpassed their previous record high of ~467 MMbbls set in the prior week.

For the past few weeks, inventory movement has been driven by strong crude oil production. Last week, however, in a bullish twist, production declined for the first time since January by 36,000 barrels per day to ~9.39 million barrels per day. While inventories are still at record high levels, reduction in supplies last week was positive news for the WTI.

A decline in production and imports partially explains why the weekly increase in inventories was less significant than in previous weeks. We’ll discuss how demand contributed to the inventory build in a later part of the series.

According to the EIA’s March STEO (Short-Term Energy Outlook), total US crude oil production averaged 9.4 MMbpd in February. Crude output averaged ~8.67 MMbpd in 2014. The EIA forecasts that output will average ~9.3 MMbpd in 2015, and increase further in 2016 to average ~9.5 MMbpd. These levels would be close to the record high US production levels of 9.6 MMbpd in 1970.

Strong crude supplies are bearish for crude prices unless met with parallel demand. In the next part of this series, we’ll analyze if demand-related factors balanced supplies.