Arch Coal (ACI) reported an overall cash cost per ton of $15.43 in 1Q15 compared to $16.46 in 4Q14 and $18.39 in 1Q14. The company has been focusing on cost savings amid difficult industry environment, as have other coal producers (KOL) such as Alpha Natural Resources (ANR), Walter Energy (WLT), and Peabody Energy (BTU).

Arch Coal did a remarkable job on the cost front throughout 2014. We were skeptical about opportunities for future cost savings when we covered Arch Coal’s fiscal 2014 and 4Q14 earnings. However, the company has lowered costs even in 1Q15, primarily due to the strong performance of the Appalachian segment. 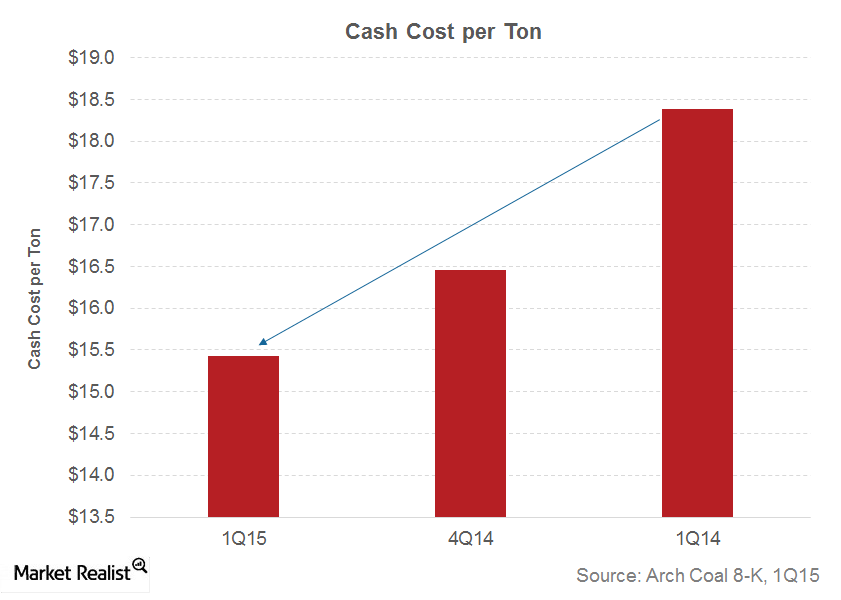 Cash costs per ton at the company’s Powder River Basin (or PRB) segment came in marginally higher at $10.96 a ton, compared with $10.81 a ton in 4Q14. However, it was still lower than 1Q14’s $11.45 a ton. The cash costs were affected by lower shipments, as well as scheduled repair and maintenance. The cost increase was partially offset by lower diesel costs due to lower crude oil prices.

The company showed remarkable cost performance at the Appalachian segment, and the cash costs in this segment were lowest in the last four years. Cash costs per ton came in at $52.41, compared with $59.37 in 4Q14 and $67.70 in 1Q14. Strong performance at the Leer Mine and ongoing cost containment efforts drove the costs in the segment down.