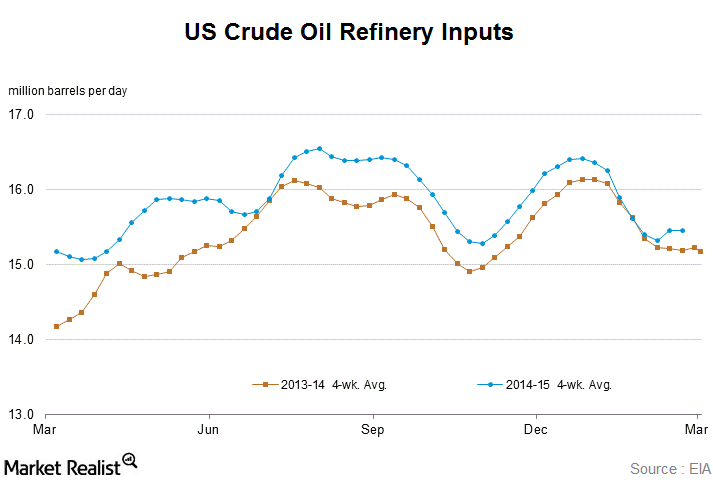 The decline in crude input demand from refineries aided the inventory build amid record production. The decline in demand is typical for this time of the year. Refineries are entering into the refinery maintenance season again.

Apart from planned maintenance, unplanned outages—like the fire explosion that occurred at the ExxonMobil (XOM) refinery in California last week and the ongoing refinery strikes in certain regions in select refineries—could also lead to a loss of demand for crude.

A crude inventory build is bearish for crude prices. In turn, it’s bearish for major oil producers like Marathon Oil (MRO), Continental Resources (CLR), and Chevron (CVX). Most of these companies are part of the Energy Select Sector SPDR ETF (XLE). They account for ~14% of XLE.

The decline in crude inputs lowered the operating levels by 1.3% to 87.4% of operable capacity last week. Analysts expected a 0.4% decline.

As a result, high supply levels and refinery maintenance induced an inventory build last week. The refinery slowdown is expected to last through April.

In the next part of this series, we’ll discuss how refinery capacity impacted gasoline and distillate inventories last week.