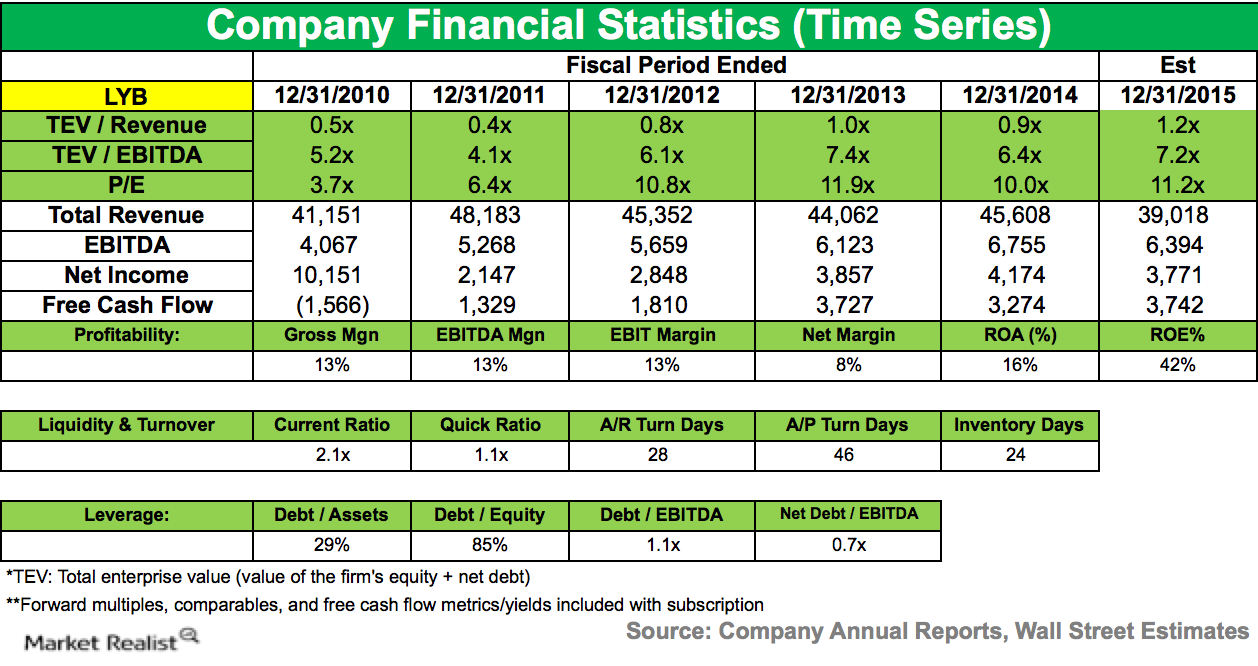 LyondellBasell Industries NV is a global, independent chemical company. It has large processing plants that convert large volumes of liquid and gaseous hydrocarbon feedstocks into plastic resins and other chemicals. Its customers use its plastics and chemicals to manufacture a wide range of products—including food packaging, home furnishings, automotive components, paints, and coatings. The company also operates a refinery in Houston. It processes crude oil into gasoline, diesel, and jet fuel.

Olefins include ethylene and ethylene co-products. According to filings, it’s one of the world’s top five independent chemical companies based on revenue.

LyondellBasell filed for bankruptcy in 2009. However, under the guidance of CEO James Gallogly, it went through an expansion. In 2014, it completed the 800 million pound per year ethylene expansion at the facility in La Porte, Texas. This expansion resulted in an increase of 25% in LyondellBasell’s US ethylene capacity.

It had a 220 million pound per year polyethylene, or PE, expansion at the facility in Matagorda, Texas. It expanded LyondellBasell’s global propylene oxide capacity by 35%. These two projects contributed $80 million to its 2014 EBITDA (earnings before interest, tax, depreciation, and amortization).

Bhavesh Patel was appointed as the new CEO, after Gallogly’s retirement in early 2015. LyondellBasell also announced the separation of its CFO Karyn Ovelmen. These leadership changes came amid the ongoing strike of the USW (United Steel Workers) union.

LyondellBasell adjusted its inventory according to the LCM (lower cost for market). The company uses LIFO (last-in-first-out) accounting. “Recent declines in pricing for many of our raw material and finished goods inventories” drove LCM. These adjustments impacted 4Q14 EBITDA (earnings before interest, tax, depreciation, and amortization) by $715 million and full-year 2014 EBITDA by $760 million.

For full-year 2014, the net income was $4.2 billion. The EPS was $8. The EBITDA was $7.1 billion. In its earnings release, LyondellBasell noted that “Every segment posted strong results for the year, with record performance from both of Olefins and Polyolefin segments, as well as our Technology segment.”

In 2014, LyondellBasell returned $7.2 billion to its shareholders. It repurchased 63.3 million shares—12% of all outstanding shares. It also increased its dividend by 17% to 0.70 per share.

In the next part of this series, we’ll discuss Point72’s position change in Talisman Energy.