Also, since many of these companies are components of the Vanguard Energy ETF (VDE), making up ~1.3% of the ETF, these trends also affect the ETF as well. Let’s see how weather affected prices last week. 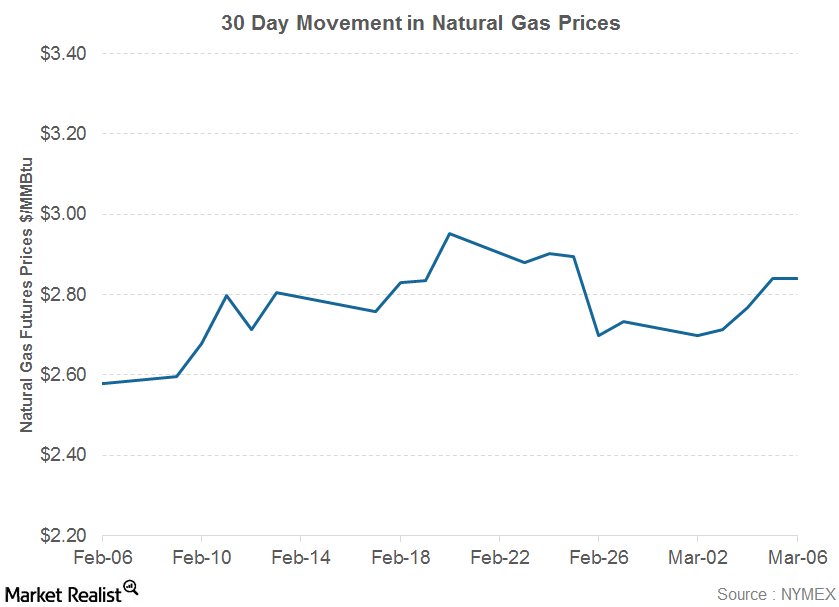 Prices started the week by declining ~1.3% amid reports of higher-than-normal temperatures in the contiguous United States from March 12 through March 16 from Commodity Weather Group LLC.

Prices settled at $2.698 MMBtu (million British thermal units) on Monday, 2 March. Prices advanced on Tuesday, however, as forecasts from MDA Weather Services called for frigid temperatures across most of the east on March 12. Prices increased ~0.5% to $2.712.

Colder weather forecasts drove prices on Wednesday as well. They increased 2.1% to settle at $2.769.

Boosted by an upbeat inventory report (see Part 2 of this series), prices continued their rally on Thursday, increasing ~2.6%, to $2.841.

Apart from weather, there’s one other factor that has affected and continues to affect natural gas prices. Continue to the next part of this series to learn more.