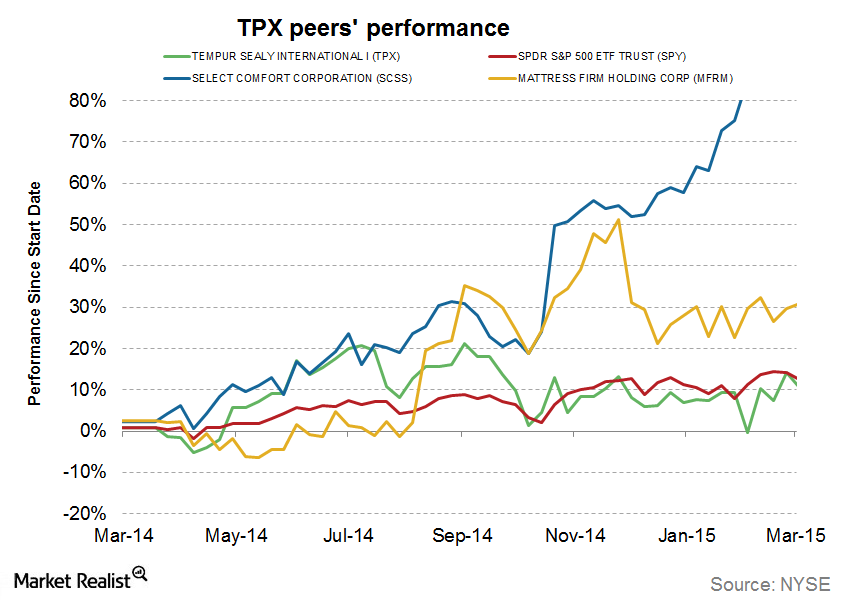 H Partners is demanding a CEO change, but it’s also seeking “the immediate resignation of directors P. Andrews McLane of TA Associates and Christopher Masto of Friedman Fleischer & Lowe, both of whose private equity firms exited their investments many years ago.”

TPX responded by saying it was, “disappointed to see that H Partners has chosen a public forum to advance an agenda that appears to be nothing more than baseless personal attacks and self-promotion.”

H Partners is pressuring Tempur Sealy to revamp its board of directors since it doesn’t include any shareholder representatives. H Partners is also raising concerns about TPX’s operational inefficiency.

Stock prices for peer Mohawk Industries (MHK) have given returns of 38.43% in the last two years. Mattress Firm Holding Corp. (MFRM) has given returns of 52% in the same period. MHK is also listed on the SPDR S&P Homebuilders ETF (XHB) with an exposure of 3.36%. This ETF tracks the overall performance of 37 publicly listed companies in the real estate sector.

Tempur-Pedic hired Mark Sarvary as its CEO in 2008 before Tempur-Pedic merged with Sealy. That year, Tempur-Pedic had two manufacturing facilities in North America and one in Europe with a total of 1,200 employees.

After the merger with Sealy, the company became larger and more complex to operate with 28 manufacturing facilities and more than 7,000 employees.

H Partners believes that as Tempur Sealy (TPX) continues to expand, Sarvary won’t be capable of leading such a large, complex firm in a competitive environment.

In the next article in this series, we’ll take a look at Tempur Sealy International’s businesses.