Nike’s (NKE) projecting a revenue increase in the low teens for 3Q15 on a constant currency basis. The stronger dollar (UUP) should affect Nike’s revenue growth by 3%. The US dollar trade-weighted index has appreciated by over 14% since the start of 2014.[1. Through March 6, 2015.] That appreciation has affected revenue from Nike’s international operations. Adverse currency movements had reduced revenue growth by 3% in 2Q15. 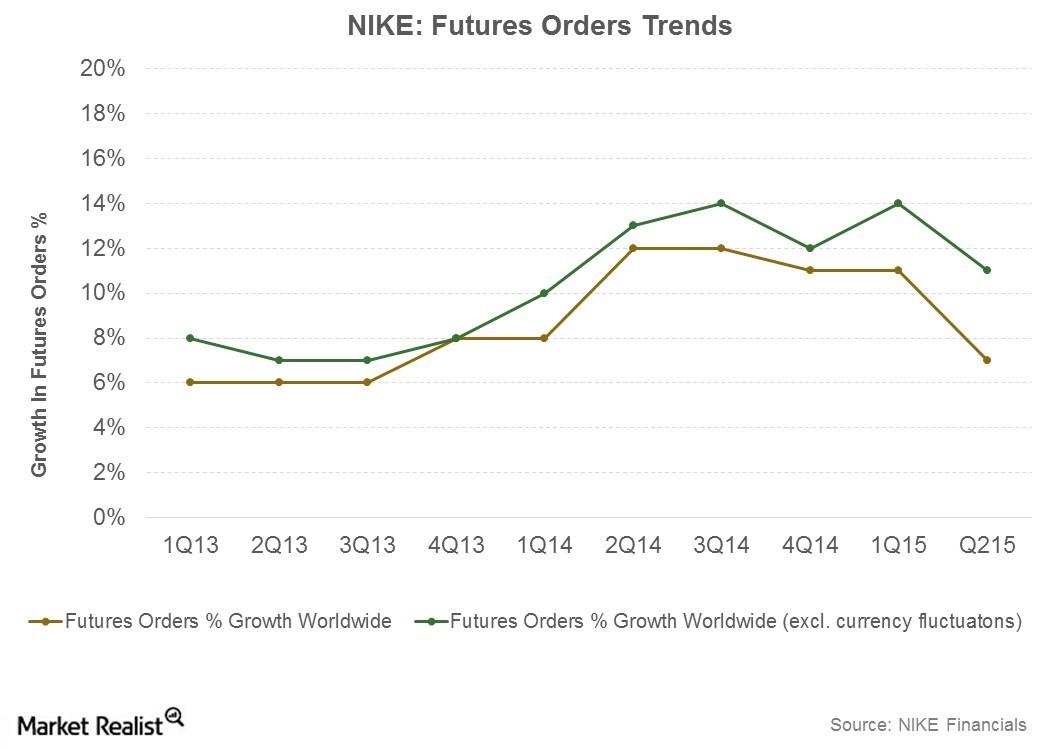 During the above-mentioned period, Nike expects orders for Europe (both Western, Central, and Eastern Europe), Japan, and emerging markets to be most affected by adverse currency movements. While futures orders were up 13% in Western Europe in constant currency terms, they were up only 4% in US dollar terms. For emerging markets and Japan, futures orders were down in US dollar terms despite increasing in local currencies.

Currency headwinds will likely affect other consumer firms (XRT)(XLY) as well, including Nike peers Under Armour (UA), Adidas (ADDYY), and Lululemon Athletica (LULU)—though to a lesser extent. We’ll cover the impact of currency movements and other macro factors in the next article of this series.

However, you should note that these orders don’t include all revenue sources—like those stemming from the company’s DTC operations, Converse sales, and Hurley sales. Nike’s rapidly expanding its retail presence globally. The company reported 30% year-over-year growth in DTC sales in 1H15, including 14% comps sales growth. E-commerce sales, estimated at $767 million in fiscal 2014, grew at 68% in 1H15.[1. Sources: company financials, Internet Retailer] Considering the impact of the factors we’ve discussed in this article, Nike’s actual revenue growth is likely outpace its growth in future orders.