Propane is a natural gas liquid (or NGL). NGLs are hydrocarbons in the same family of molecules as natural gas and crude oil. Other NGLs include ethane, butane, and pentane. Propane and ethane in particular are both important feedstock for chemical plants. Around 5% of all American homes use propane as a heating fuel. So it’s important for investors to monitor propane prices.

Propane prices affect propane distributors such as Ferrellgas Partners (FGP), Suburban Propane (SPH), AmeriGas (APU), and NGL Energy Partners (NGL). Most of these companies are components of the First Trust North American Energy Infrastructure Fund (EMLP) and make up ~3.5% of the ETF. Only NGL, however, is part of the Alerian MLP ETF (AMLP), an ETF that consists of the top 25 US MLPs. NGL makes up 1.34% of AMLP.

The price of propane depends on inventory, which in turn depends on the severity of winter. In the winter of 2013, propane prices spiked as inventories in certain regions that desperately needed it experienced a propane shortage on account of severe cold and a lack of transportation.

Last week, residential propane prices averaged ~$2.34 per gallon, which was ~$0.02 per gallon lower than the week prior, and ~$0.74 per gallon less than the price in the corresponding period last year.

So far this winter, prices are lower and also steadier, closer to ~$2.40 per gallon. This is mainly because of the comfortable inventory position in propane, which the chart below illustrates. 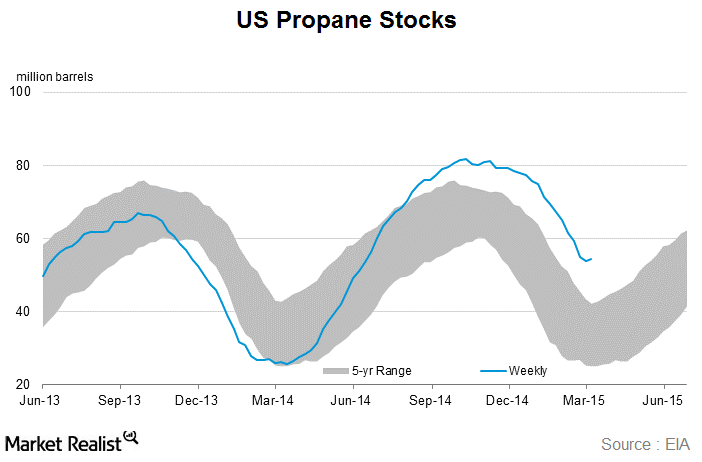 Outlook for propane demand and prices

The U.S. Energy Information Administration (or EIA) in its March STEO (Short-Term Energy Outlook) expects household spending on propane in the Midwest to be 32% less this year than last winter. This is a result of prices that are 27% lower than last winter.

The EIA expects household spending in the Northeast to be 18% less, as prices are 16% lower than they were last winter.