Seth Klarman of The Baupost Group is one of the best performing hedge fund managers of all time. The fund generated $21.5 billion in returns over its history. In this series, we’ll discuss the notable holdings traded by the $27 billion fund—as highlighted in the fourth quarter filing in February.

In December, we noted that the size of the fund’s US long portfolio for 3Q14 fell to $5.74 billion. It was $6.14 billion in the second quarter. The recent 13F filing revealed that the fund’s 4Q14 portfolio declined more to $5.09 billion.

A Bloomberg report, by Sabrina Willmer and Mary Childs, earlier this month said that the fund gained 7%–8% in 2014. However, it couldn’t outperform the S&P 500 Index. The index saw 14% returns. A year-end investor letter on the market environment in 2014 noted that “Bargains became increasingly scarce as the year progressed.” It also said that “Baupost wasted no time in redirecting additional investment team members into the energy area to sift through the carnage.” 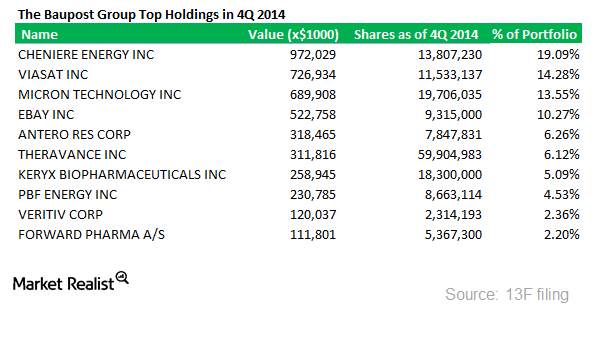 In the next part of this series, we’ll discuss Baupost Group’s new position in Bellatrix Exploration.