In its recent STEO (Short-Term Energy Outlook), the EIA (U.S. Energy Information Administration) stated that January marked the seventh consecutive month that the monthly average Brent prices decreased. They decreased by $15 per barrel from December to a monthly average of $48 per barrel. This is the lowest since March 2009.

WTI (West Texas Intermediate) prices also fell from an average of $59 per barrel in December to $47 per barrel in January—the lowest level since February 2009. 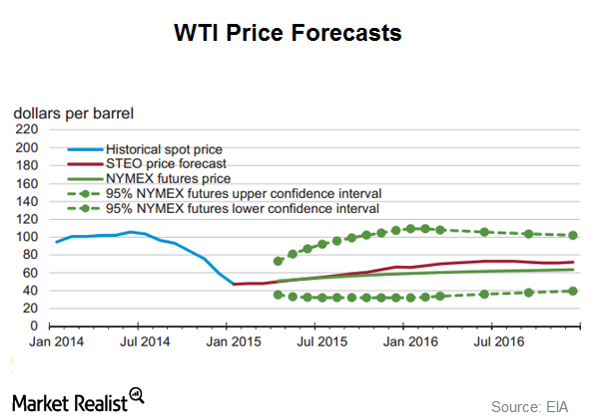 A key “supply-based” response to low oil prices has been a sharp decline in rig counts and reductions in the 2015 capex budgets by major oil and gas companies—including EOG Resources (EOG), Marathon Oil (MRO), Chevron (CVX), and BP Plc (BP). Most of these companies are part of the Energy Select Sector SPDR ETF (XLE). They account for ~19% of XLE.

Despite these reductions, the EIA expects 2015 production to touch 9.3 million barrels per day, or MMbbls/d, in 2015. In 2014, production averaged 8.6 MMbbls/d, according to EIA estimates.

According to the EIA, WTI prices will average $50 per barrel in the first half of 2015. However, the EIA believes that as oil prices start rising in the second half of 2015, drilling activity will likely increase again. Capex cuts and lower drilling might offer some hope for oil prices. Markets might perceive supply and demand balancing out.

In the next part of this series, we’ll discuss the EIA’s global oil supply projections.