Crude oil prices resumed their downward movement. They started the week by falling to their lowest level since 2009. 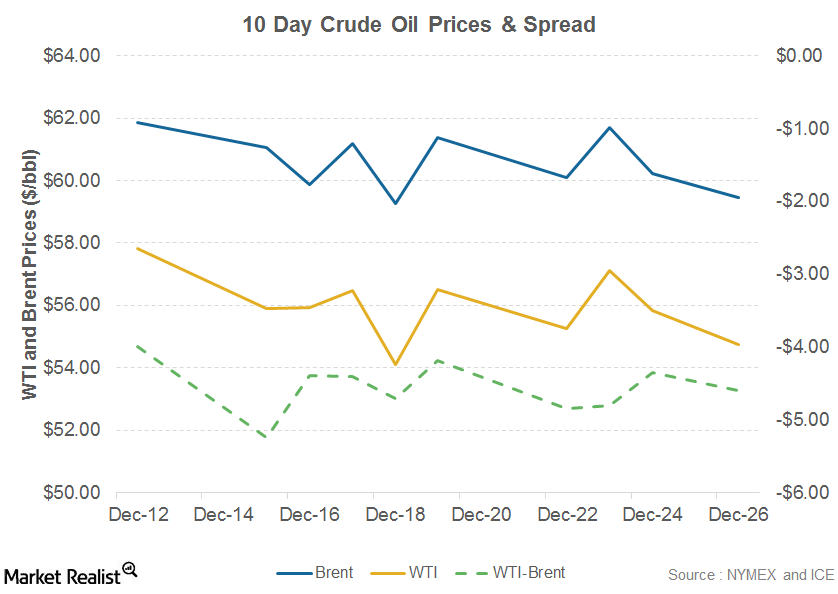 On Tuesday, WTI prices climbed due to concerns about production disruption in Libya. Crude prices were also supported by the news that the US government is taking steps that could increase the amount of oil exports. The US government issued guidelines on how and what kinds of oil—condensates—companies could export to other countries.

These guidelines don’t eliminate the ban on most crude exports. Congress adopted the ban in 1975.

On Wednesday prices fell despite the EIA’s (US Energy Information Administration) bullish crude inventory report. The report showed that stocks decreased unexpectedly. Read Part 2 of this series to learn more about the movement in crude oil stock last week.

Prices came under pressure after the Chinese manufacturing purchasing managers’ index, or PMI, came in at 49.6 for December—down from 50 in November. This is the first time the PMI dropped below 50 since May. A weaker PMI reading indicates weakening domestic demand.

The decline extended into Friday. According to the oil ministry, it reached fresh five-year lows after Iraq—the second largest producer in OPEC (Organization of the Petroleum Exporting Countries)—said that it plans to boost crude exports to 3.3 million barrels per day, or MMbbls/d, this month.

The main concern regarding oil prices is that supply is outpacing demand. This is bearish for oil prices.

So, ETFs that have these companies among their top holdings—like the Energy Select Sector SPDR ETF (XLE) and the SPDR S&P Oil & Gas Exploration & Production ETF (XOP)—will also feel the pressure of weak crude prices.

In the next part of this series, we’ll discuss the EIA’s forecasts for oil prices in 2015. We’ll also discuss the production and demand projections.