In May last year, Mondelēz International (MDLZ) announced plans to reduce operating costs through a restructuring program. Mondelēz’ restructuring program will cost $3.5 billion, of which $2.5 billion is cash. The program is expected to deliver cost savings of at least $1.5 billion by 2018. The company expects lower overheads and accelerated supply chain cost reductions to generate roughly half of the total incremental savings. 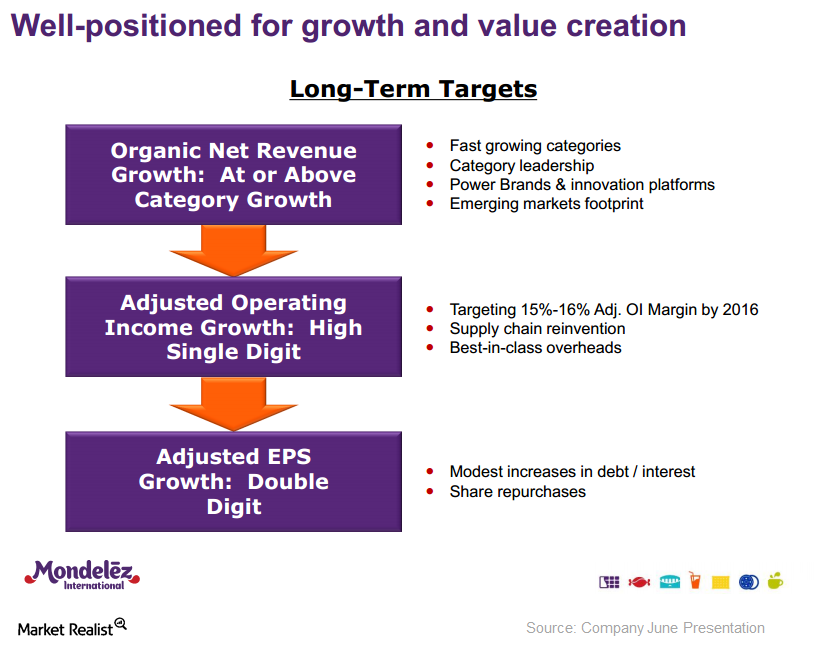 In September 2013, Mondelēz highlighted initiatives to redesign its supply chain. It planned to install manufacturing lines for its products that required lesser capital and reduce operating costs. It said these “lines of the future” can be installed in one-third the time and provide double the capacity in half the space as older designs.

The company also revealed plans to invest in 14 greenfield plants by 2020. They will be built on advantaged platforms in locations with optimized logistics that will support demand. These are aimed at raising volumes and revenue. Mondelēz also targeted productivity improvements through Lean Six Sigma, procurement transformation, and simplification programs.

In November last year, the company agreed to acquire an 80% stake in Kinh Do Corporation’s category-leading snacks business in Vietnam. Kinh Do’s popular brands of cakes and biscuits are expected to complement Mondelēz’ portfolio of snack brands in the region. Last year, Mondelēz also disclosed plans for investment in plants in Turkey and Bahrain.

Mondelēz has also disclosed that margin expansion in North America and Europe will fund its growth investments. The company intends to improve its operating income margin to the upper end of the peer average. Some of Mondelēz’ global peers include Nestlé (NSRGY), General Mills, Inc. (GIS), Kellogg Company (K), The Hershey Company (HSY), and ConAgra Foods, Inc. (CAG).

In November, Mondelēz announced plans to invest $50 million in its Banbury factory in the United Kingdom to build two new lines that will manufacture Tassimo beverage capsules. Earlier in 2014, the company also committed $100 million to build a state-of-the-art biscuit factory in the Czech Republic and to invest about $100 million in the Bournville chocolate manufacturing site in Birmingham, United Kingdom.

Along with the restructuring program, Mondelēz also announced in May 2014 plans to combine its coffee portfolio with D.E. Master Blenders 1753 B.V. We’ll look at this more in the next part of this series.