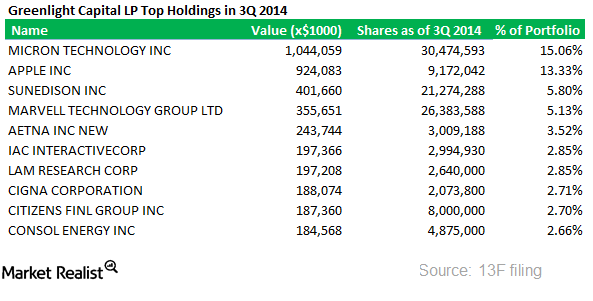 The fund stated in its letter that new positions were added in Time Warner (TWX), ISS A/S (ISSJY), and Keysight Technologies (KEYS). Positions exited were Cigna (CI), Osram Licht AG (OSAGY), and a short position in Cliffs Natural Resources (CLF). The position size and value was not disclosed for any of the positions in Greenlight’s investor letter. 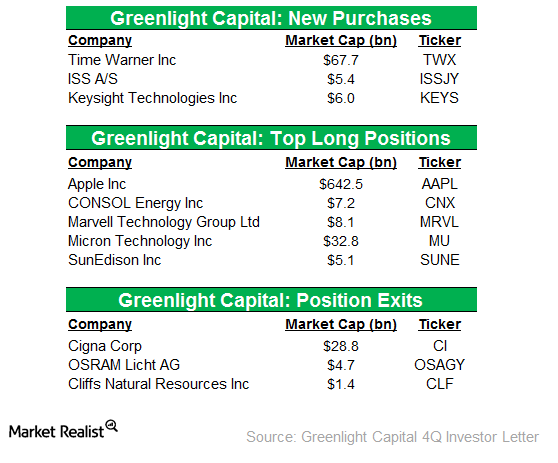 Greenlight noted in its letter that its funds gained 5.6% net of fees and expenses in 4Q14, bringing a full-year net return to 8.0%. The letter added that while the S&P 500 returned more than 13% for the year, most other developed markets performed much worse, especially on a dollar basis. The fund added that “the overall environment was reasonably favorable” and that its full-year results were “fair.”

Greenlight also talked about the impact of lower oil prices, and added that it sold “enough” WTI oil futures in mid-June last year to offset the subsequent declines in its positions in Anadarko, BP, McDermott, and National Oilwell Varco. It noted that all of these positions were exited at their higher June prices. The positions were reviewed by the fund after the Sohn Investment Conference, where hedge fund manager Zach Schreiber forecast a “sharp fall in WTI oil prices.”

The fund noted that lower oil prices impacted its position in Civeo (CVEO), which the fund termed as a “significant loser” during 4Q14. Shares of Civeo fell due to plunging oil prices, which led to reduced expectations for 2015. Greenlight stated that it did not “hedge CVEO’s exposure to oil, because it was viewed as a real estate company and its sensitivity to commodity prices was underestimated.” An update on JANA Partners’s and Greenlight’s positions in Civeo was highlighted in a recent Market Realist series.

The next part of this series will highlight Greenlight’s new position in Time Warner.