In Part 1 of this series, we learned how valuable the iPhone segment is for Apple (AAPL). China is Apple’s most important market after the US and Europe. According to a recent report from Counterpoint, iPhone sales in China grew by 45% in November 2014 compared to the same month in 2013.

Apple is now behind Xiaomi and Lenovo (LNVGY) in the Chinese smartphone market, with Samsung (SSNLF) falling to fourth place. As the chart below shows, Apple held a 12% share in China in November, while Samsung had a 9% share.

As noted in Part 1, meanwhile, the real gains in iPhone sales came during the Christmas period. As a result, it’s highly likely that Apple did gain more market share in China in the month of December. 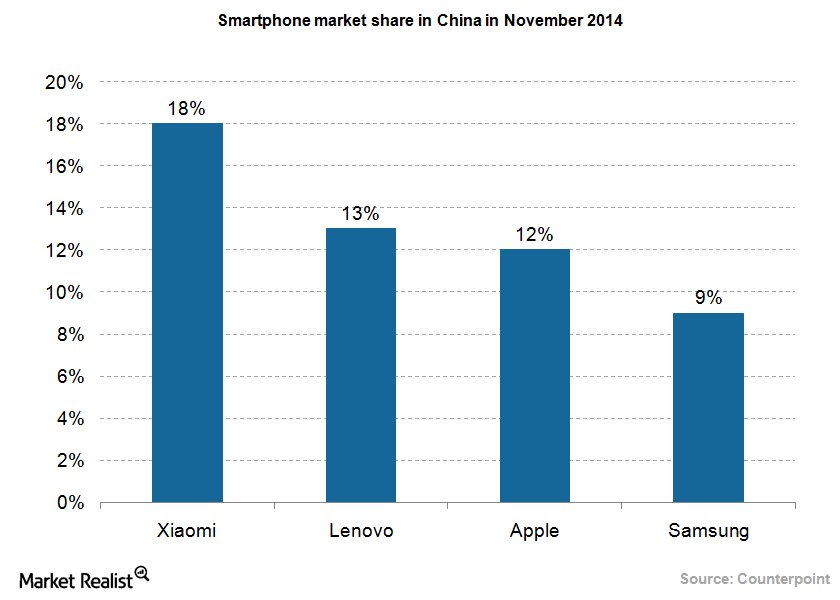 Xiaomi’s story is interesting. The company has a different strategy than other smartphone players, selling its smartphones over the Internet at razor-thin margins. Recently, the company announced that its smartphone sales had tripled to 61 million in 2014 compared to 2013.

Not long ago, however, Ericsson (ERIC) launched a patent complaint against Xiaomi. The complaint led an Indian court to temporarily suspend the sale of Xiaomi smartphones in India. Despite this setback, the company managed to raise $1.1 billion, and has increased its valuation to $46 billion.

Although the iPhone 6 and iPhone 6 Plus were released in the US in September, the release of these smartphones were delayed in China because Chinese regulators had to scrutinize new security features on the devices. As a result, Apple experienced slow growth in Greater China (China, Hong Kong, Macau, and Taiwan). Apple’s revenue from Greater China only grew 1% year-over-year in fiscal 4Q14 compared to 28% growth in 3Q14.

Now that iPhone 6 and iPhone 6 Plus have been released, we expect to see robust sales in China. We also expect Apple’s partnership with China Mobile (CHL) to start producing results.

China Mobile is the largest telecom provider in the world with 800 million subscribers. With such a large subscriber base, Apple should directly benefit from the multi-year deal it announced with China Mobile in December 2013.