The budget balance is the difference between what a country’s government earns from taxes and other sources and what it spends. A budget deficit occurs when spending exceeds earnings. 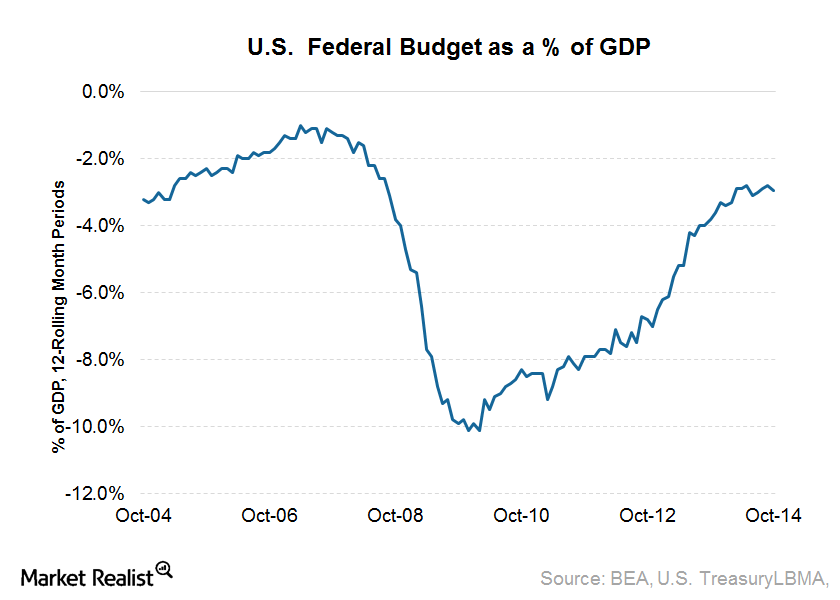 When spending exceeds earnings, the government borrows money from its citizens. It also borrows money from foreign entities. As this debt keeps on accumulating, it’s possible that the value of its currency will decrease. The currency decreases because of fears within the international community. Other countries question the country’s ability to repay the debt.

The US Treasury reports the federal budget balance monthly.

The US government ran a deficit of $121.7 billion in October. It increased by 34% compared to the same month last year. However, the increase was a result of calendar shifts rather than a worsening fiscal picture. A Treasury official said the October deficit would have been $84 billion, or $6 billion lower than the October 2013 shortfall, if not for the calendar adjustments.

The US government’s budget year runs from October through September. The government finished the 2014 fiscal year with a budget deficit of $483 billion, which is 29% lower than the deficit in fiscal 2013. The Congressional Budget Office expects the annual deficit to shrink once again in 2015.

Budget deficit’s impact on US debt

The deficits continue to accumulate. They keep adding to the US federal debt. The federal debt has exploded since 2008. But the situation is getting better. This should be positive for the USD. A strengthening USD usually leads to weaker gold prices.

It’s negative for gold-backed exchange-traded funds (or ETFs) like the SPDR Gold Shares (GLD). The deficit is also negative for stocks like Goldcorp Inc. (GG), Barrick Gold Corp. (ABX), Newmont Mining Corporation (NEM), and Kinross (KGC). It also hurts ETFs that invest in the above stocks, like the Gold Miners Index (GDX).