Investments in any industry grow only if there are adequate returns. Rising returns in the airline industry have driven the growth in capital investments for the purchase of aircraft.

According to the IATA (International Air Transport Association), airlines will take delivery of more than 1,700 new aircraft in 2015. This requires an investment of $180 billion. The global airline industry had a fleet of ~26,000 aircraft in 2014. Due to rising returns on invested capital, investments have increased and the number of aircraft has risen by ~3% in the last two years. It’s expected to grow by ~3.6% in 2015. 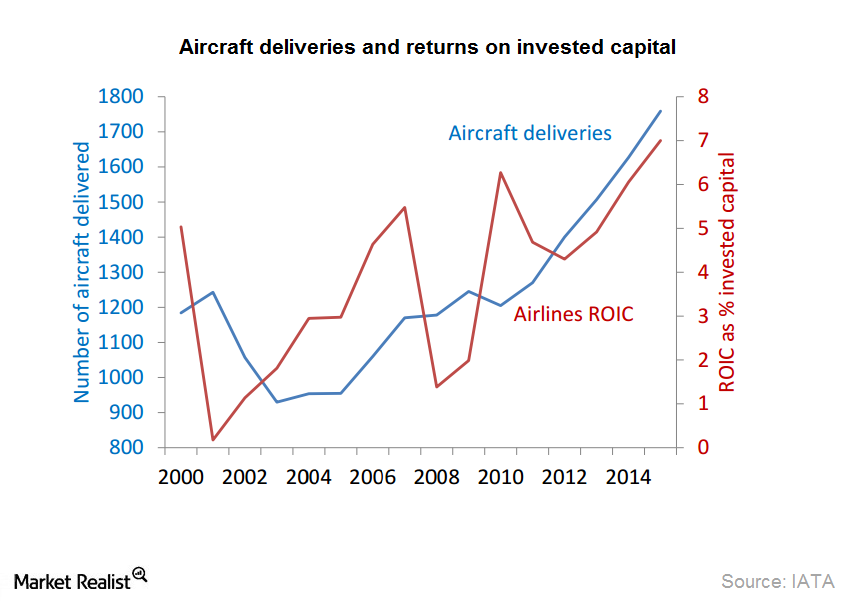 Investment in new aircraft is driven by the need to replace older aircraft that are less fuel-efficient. More than half of the new aircraft expected to be delivered next year will replace older ones. For an airline, the best hedge against fluctuating fuel costs is to invest in aircraft that use advanced engine technology, which results in improved fuel efficiency. Lower fuel burn reduces total fuel consumption and contributes to an airline’s profitability.

Major US airlines, including Delta Air Lines, Inc. (DAL), United Continental Holdings Inc. (UAL), and American Airlines (AAL), have invested huge amounts on new fuel-efficient aircraft either as replacements for older aircraft or as new additions to the fleet.

Since fixed costs associated with aircraft purchases are high, it should be supported by a strong demand for air travel. Hence, a rise in investment is also an indicator of expected growth in future demand. However, excess capacity may hurt margins as it leads to lower yield and utilization rates. Due to an increase in the average aircraft size, growth in available seat miles will be higher, but the passenger load factor will be impacted slightly.