Elliott Management took a new position in Family Dollar Stores (FDO) during the third quarter that ended in September. The position accounts for 2.90% of the fund’s 3Q14 portfolio. An October letter revealed the fund owns a 4.9% stake in FDO. 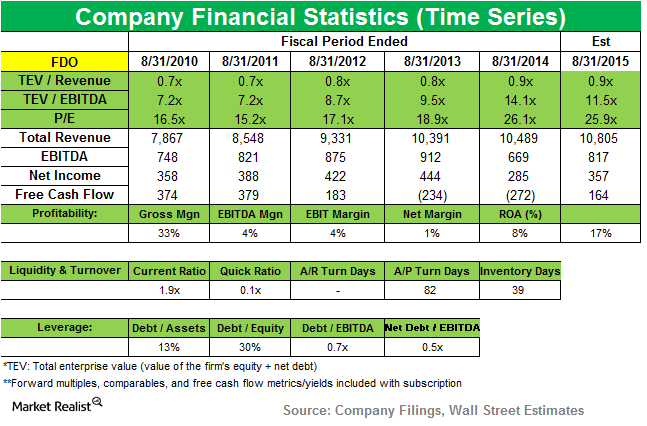 Family Dollar operates a chain of more than 8,100 stores in 46 states. It sells all of its products for less than $10. The company is investing more than $50 million annually to lower the prices of nearly 1,000 stocking keeping units, or SKUs, to be more competitive in the discount retailing market. It introduced tobacco in its stores and is planning to begin a multiyear rollout of beer and wine in 2015.

In July, DLTR announced a $8.5 billion acquisition of FDO. FDO is a leading national discount retailer. While both companies’ boards approved the deal, in November FDO delayed a shareholder vote on the DLTR offer until December 23.

The merger is being reviewed by the FTC (Federal Trade Commission). The FTC indicated that some divestitures will be required for an approval. DLTR said it might have to divest fewer than 500 stores to complete the acquisition of FDO. It said it “does not expect any such divestiture to have a material impact on its plans for the combined organization.” The merger is expected to close by February 2015.

FDO is also being pursued by leading discount chain Dollar General Corp. (DG). DG’s two bids were rejected by FDO over antitrust considerations. On October 1, DG announced that it started a tender offer to acquire all of FDO’s outstanding shares for $80 per share in cash. This offer was extended to December 31. Recently, DG said it “remains committed to acquiring Family Dollar.”

In a statement on DG’s competing offer, DLTR said that it believes that the FTC may require divestitures in excess of the 1,500 stores that DG offered to divest in its tender offer for FDO.

In October 2014, Elliott Advisors UK Limited disclosed a 4.9% stake in Family Dollar and said in a letter that Family Dollar should “provide Dollar General…with an even playing field in its continuing efforts to acquire the company at price levels that are clearly superior” to those being offered by Dollar Tree. It also said it nominated “a slate of seven highly qualified candidates” for election to Family Dollar Stores’ board.

The next part of this series will highlight the fund’s position in Time Warner Cable (TWC).