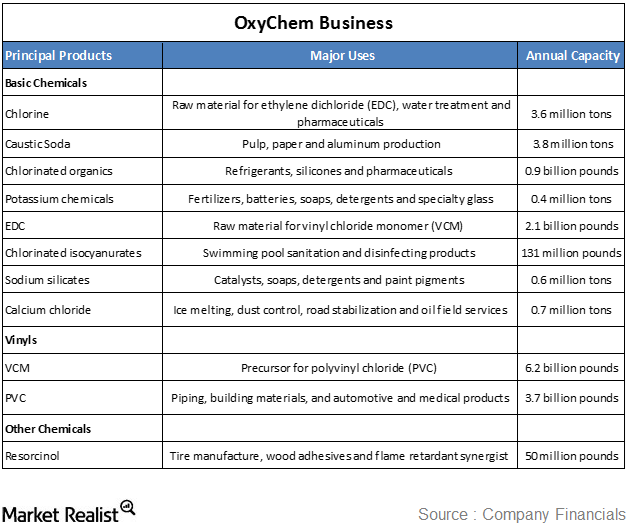 OxyChem focuses on the chlorovinyls chain beginning with the production of chlorine, which is co-produced with caustic soda. Both products are then marketed to third parties.

Plus, chlorine, together with ethylene, is converted through a series of intermediate products into PVC (polyvinyl chloride). Therefore, OxyChem’s focus on chlorovinyls allows it to maximize the benefits of integration and take advantage of economies of scale.

During 2013, OxyChem sold its interest in a Brazilian joint venture. Plus, OxyChem announced it would begin operations at a chlor-alkali plant in Tennessee with a capacity of 182,000 tons per year.

Also, in the fourth quarter of 2013, OxyChem and Mexichem, S.A.B. de C.V. formed a 50/50 joint venture to construct and operate an ethylene cracker with a capacity of 1.2 billion pounds per year. The companies expect operations to start in 2017.

The performance of the chemical industry has a direct bearing on OxyChem’s business and the products it manufactures.

Industry performance in turn depends on the health of the global economy, specifically in the housing, construction, automotive, and durable goods markets. Margins also depend on market supply, demand balances, and feedstock and energy prices.

Other oil and gas companies that engage in the chemical business include Chevron Corp (CVX) and ExxonMobil (XOM). These companies are all components of important ETFs such as iShares U.S. Energy ETF (IYE) and Energy Select Sector SPDR Fund (XLE).

Continue on to the following part of this series to read about OXY’s midstream business segment.