Shares of E. I. Du Pont de Nemours And Co (or DuPont) (DD) surged this month over reports that activist investor Nelson Peltz, of Trian Fund Management, intends to split up the multinational corporation. In this series, we’ll look at what Trian wants from DuPont, describe the multinational’s various business segments, and review its recent performance. 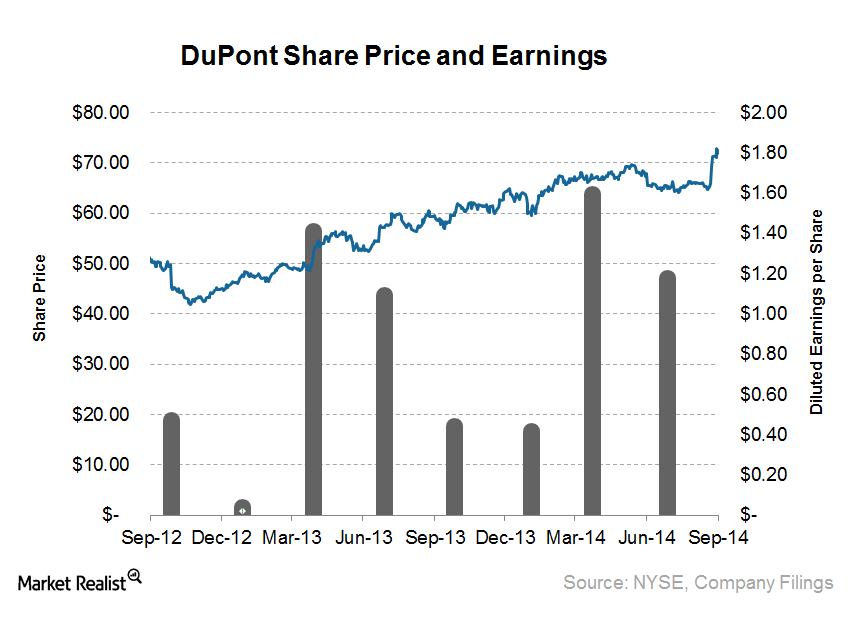 Trian sends letter to DuPont’s board

Peltz accumulated a stake in DuPont a year ago and has since urged the chemical conglomerate to improve its financial performance. A letter from Trian to DuPont’s board said that its funds own approximately $1.6 billion of  the multinational corporations’s outstanding shares, making the fund manager one of DuPont’s largest shareholders. The letter also noted initiatives that Trian “believes could significantly improve DuPont’s financial performance and double the value of its common stock within three years.” One of these initiatives is to separate the company’s high-growth businesses from its cyclical ones.

DuPont responded to Trian’s letter by stating that it remains “committed to executing on its strategic plan to drive growth and profitability.”

A March report by credit rating agency Moody’s Investors Service noted shareholder activism in the chemical industry is expected to continue given the recovery in the economy. It added that “activist shareholders appear to be targeting companies whose share prices have lagged the S&P Chemicals Index, those that have built large cash balances, or those that have benefited from low U.S. energy and feedstock costs without proportionally increasing returns to shareholders.”

DuPont and its peers, Dow Chemical (DOW) and Air Products and Chemicals, Inc. (APD), have been subject to shareholder activism recently. William Ackman’s Pershing Square went activist on Air Products and Chemicals, Inc., with the belief the company lagged its peers such as Praxair, Inc. (PX) and was undervalued. Dow Chemical saw Dan Loeb’s Third Point Partners urging it to accept a possible spinoff of the petrochemicals business and to consider a share buyback plan.

Activist fund Trian pushed for similar strategies at Kraft Foods Group Inc, PepsiCo, Inc., and Ingersoll-Rand PLC. The fund stated in its release that it was founded in 2005 by Nelson Peltz, Peter May, and Ed Garden, and that it “seeks to invest in high quality but undervalued and under-performing public companies and to work constructively with the management and boards of those companies to significantly enhance shareholder value.”