American Airlines (AAL) regained its position as the leading airline of the the U.S. airline industry after merging with U.S. Airways. The following are the key highlights of the merger.

American Airlines has overtaken Delta to become the largest U.S. airline both in terms of domestic revenue passenger miles (or RPMs) as well as capacity after it merged with U.S. Airways in December 2013. 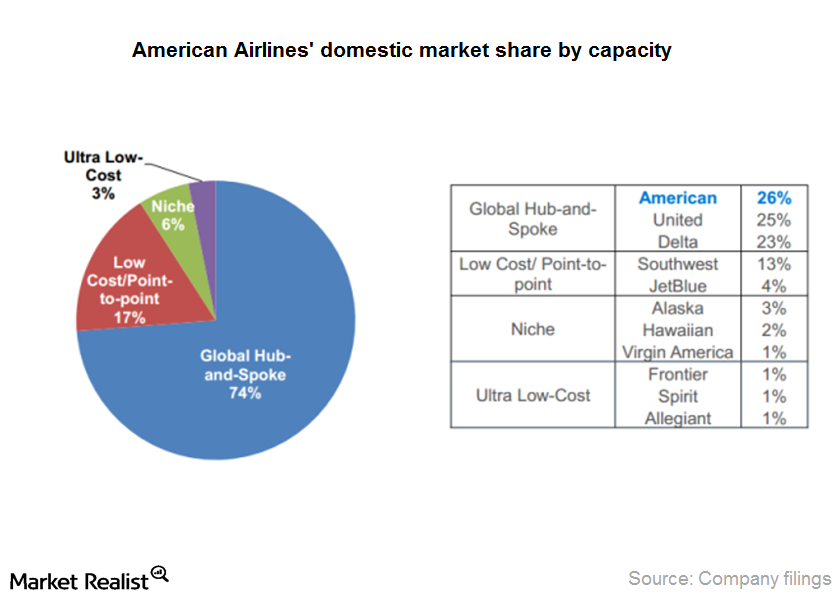 American’s domestic market share by RPM is ~20%, compared to Delta’s (DAL) 17%. American’s share in domestic capacity is ~26%—the highest among its legacy peers. The top six airlines in the U.S. include American (AAL), Delta (DAL), United (UAL), Southwest LUV), and JetBlue (JBLU). Together, they account for ~78% of the U.S. domestic market share by passenger traffic. Investors can gain exposure to these stocks through ETFs such as the SPDR S&P Transportation ETF (XTN) that hold more than 40% of their portfolio in airlines.

The merger integration has been smooth so far, as the company was able to combine operations in 80 airports. On Monday (October 20, 2014), the company announced that it has successfully integrated 154 facilities in the cargo division—the first division to be fully integrated. The expected network and cost synergies from the merger are $1,050 million.

After the merger, the company’s performance has improved substantially. American was able to grow its revenue by 5.6% despite weather-related challenges in the first quarter. The second quarter’s profit of $1.5 billion was supposed to be the best result in the company’s history.

This success has renewed investors’ confidence in the company, leading to the ~80% share price increase in just 138 trading days. This was primarily due to operational improvements of the merged entity and the smooth progress of the merger integration. You can learn more about U.S. airline industry consolidation and restructuring and merger synergies in the U.S. airline industry on the Market Realist site.