Why do some investors shy away from stocks? Behavioral finance studies have found that investors are roughly twice as sensitive to losses as they are to gains. In addition, people tend to evaluate gains and losses over a relatively short time horizon that may not be in sync with the longer horizon over which investment goals are expected to be achieved. This extreme fear of losses in the near term, combined with people’s tendency to look at each investment in isolation, helps to explain low stock market participation rates.

Market Realist – Investors concerned about short-term losses tend to avoid the U.S. equity markets (SPY) and keep their portfolios in cash instead. The graph above shows the findings of research conducted by the State Street Center for Applied Research.

The survey, recording cash holdings by retail investors across 16 nations, observes that retail investors were globally holding an average of 40% of their assets in cash in the first quarter of 2014, up from 31% in 2012. 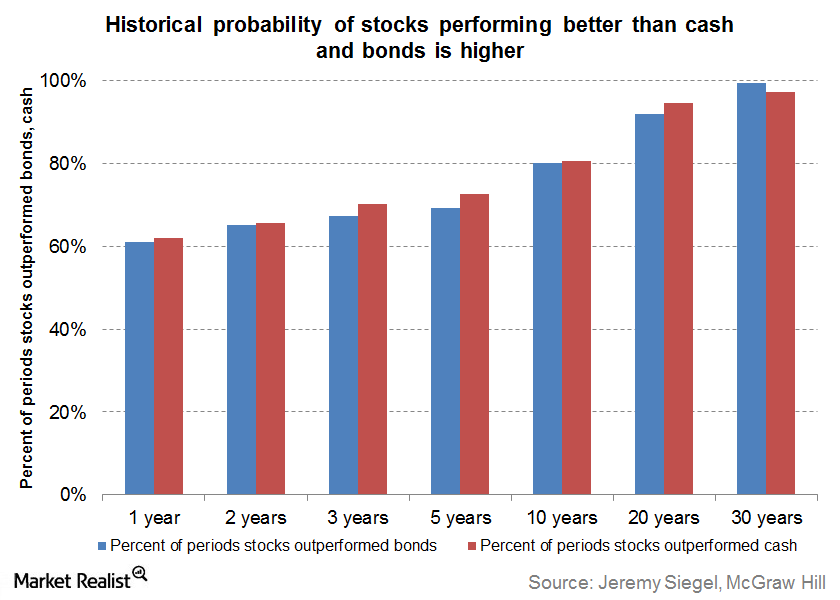 Market Realist – The above graph shows the results of an academic study by Wharton professor Jeremy Siegel, who states in his iconic book, Stocks for the Long Run, that U.S. stocks tend to outperform bonds and cash over a longer duration. The extreme fear of losses in risk-averse investors keeps them away from the markets and they miss out on the returns they could have earned.

Read on to the next part of this series to see why not diversifying could cost you dearly.