Maverick Capital added a new position in Allison Transmission Holdings (ALSN), which accounts for 2.85% of the fund’s second quarter portfolio. 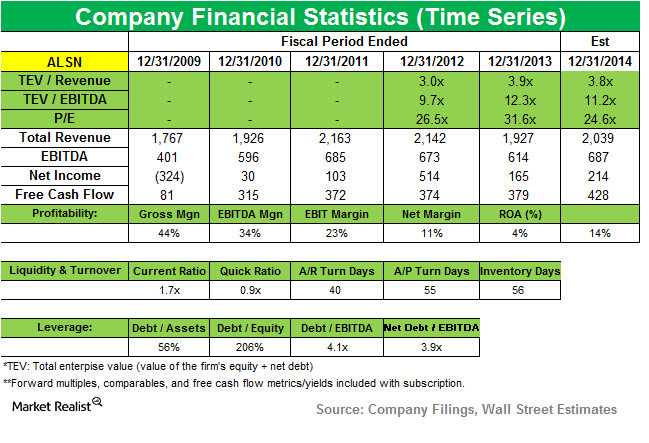 Allison generates net sales primarily from the sale of transmissions, transmission parts, support equipment, defense kits, engineering services, and extended transmission coverage to a number of original equipment manufacturers (or OEMs), distributors, and the U.S. government. Although approximately 77% of its net sales were from North America in 2013, Allison has a global presence, serving customers in Europe, Asia, South America, and Africa.

Indianapolis-based Allison stated in its 10Q filing that commercial vehicle production drives its net sales, and this correlates closely with macroeconomic conditions. In 2013, approximately 61% of all fully automatic transmissions for medium- and heavy-duty on-highway commercial vehicle applications resulted from global sales.

Allison’s net sales for 2Q14 beat estimates and rose 5% to $536 million. The company said the growth resulted from continued recoveries in the North America on-highway and off-highway end markets, and higher demand in the service parts, support equipment and other end market. However, lower demand in markets outside of North America and reductions in U.S. defense spending had a negative impact on sales.

The company said it is increasing its full year net sales guidance in the range of 4% to 6% year-over-year. This update is “due to anticipated improvements in second half demand conditions in the North America on-highway and off-highway end markets.” The outlook also incorporates “weakness in the outside North America on-highway end market and previously contemplated reductions in U.S. defense spending.”