The Bakken Shale which lies in North Dakota and Montana, is a major oil producing source in this region. Another formation, which is also known as the Three forks formations, is also a major oil resource. Both the Bakken and the Three Forks are part of the Williston Basin. 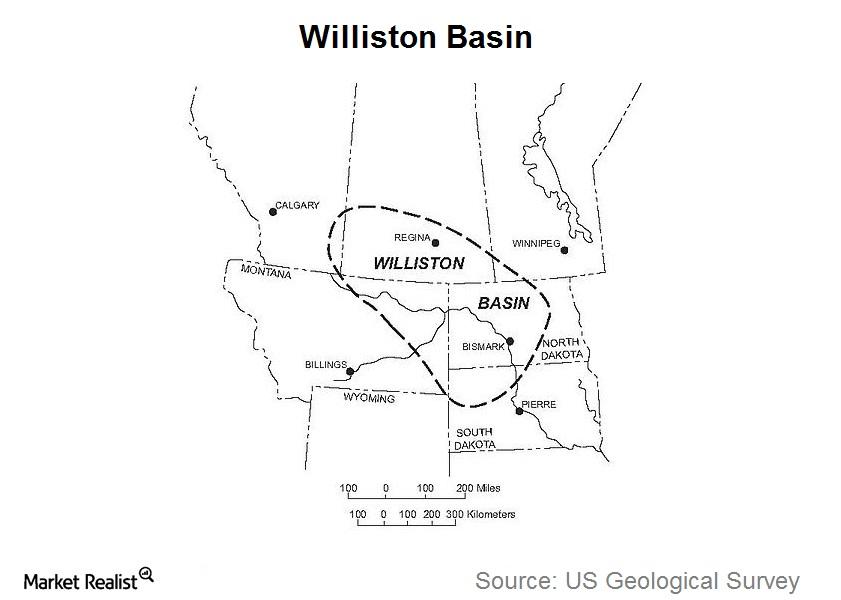 Over the years, oil production in the Bakken has been increasing rapidly. The surge in production is forecast to continue.

To keep up with this growth, the pipeline infrastructure that delivers crude to the market hasn’t been built quick enough. As a result, existing pipelines to market are congested—particularly in the midwest at the Cushing, Oklahoma hub. This congestion had caused prices for Bakken crude to face heavy discounts versus the West Texas Intermediate (or WTI) crude prices. This wide gap between the Bakken crude and the WTI had been eating into producers until 2012. In 2012, rail shipments became a viable option for takeaway capacity. As production grew, companies began utilizing more rail. Currently, nearly 70% of all crude produced in the Bakken is transported by rail. According to the North Dakota Pipeline Authority, the Bakken rail outflow capacity totaled 965,000 barrels per day at the end of 2013, compared to 515,000 barrels per day of pipeline capacity.

Refineries on the East and West Coast have benefitted

Refineries on the East and West Coast, in particular, have been among the biggest beneficiaries of transportation of crude by rail or “crude-by-rail.”

Before 2012, many East Coast refiners (PADD1) relied on the more expensive imported crude, while their midwestern counterparts enjoyed the relatively cheaper WTI crude. However, since producers in the Bakken region (PADD2) started exporting their crude to the east by rail, refiners in these regions have begun to reap the benefits of the crude-by-rail boom. Some of the East Coast companies that were the first to make investments in rail infrastructure, and continue to do so in 2014, include PBF Energy (PBF) and Phillips 66 (PSX)—both of which, are a part of the SPDR S&P Oil & Gas Exploration & Production ETF (XOP).

West Coast refineries (PADD 5) have also ramped up crude-by-rail volumes in recent years with several large unloading facilities that are being planned to come online in the next few years. Tesoro (TSO), one of the largest West Coast refiners, currently has a capacity to unload 50,000 barrels per day at its refinery in Anacortes, Washington. Tesoro has proposed a 360,000 barrels per day facility at the Port of Vancouver.

The fact that rail has been considered a more popular and viable option by Bakken producers is clearly seen from the cancellation of Oneok’s (OKE) proposed 200 million barrels per day and the 1,300-mile Bakken Oil Express pipeline from North Dakota to Cushing in November, 2012. The company announced that there was insufficient shipper interest in moving crude to Cushing by pipeline. Rail is likely the major reason for this cancellation because it was more cost effective than the $1.8 billion that the company had planned to spend on the pipeline.

The following sections in this series discuss the benefits of rail over pipeline in more detail.