An overview of AMLP

The Alerian MLP ETF (AMLP) launched in August 2010 and is designed to track an investment in the Alerian MLP Infrastructure Index (AMZI). The underlying index was developed by Alerian, a leading provider of objective MLP and energy infrastructure benchmarks, data, and analytics. Alerian launched the Alerian MLP Index (AMZ) in 2006. It’s a composite of the 50 most prominent energy master limited partnerships (or MLPs). AMZI was born out of AMZ in 2008 and is a midstream-focused subset of the AMZ, comprising 25 energy infrastructure MLPs. MLPs are specially structured entities that are exempt from corporate income taxes.

Of all the current MLPs, the majority are engaged in energy infrastructure such as pipelines, storage facilities, and processing plants. AMLP tracks the 25 largest companies in the midstream sector of the MLP universe. These midstream MLPs earn the majority of their cash flows from the transportation, storage, and processing of energy commodities. 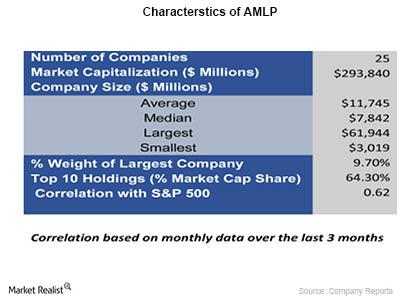 To learn more about AMLP’s top holdings, continue to the following part of the series.