Google (GOOG) announced its Q1 2014 earnings Wednesday. Although Google’s revenues of $15.4 billion were almost in line with Wall Street expectations of $15.5. billion, the EPS of $6.27 per share were below analysts’ expectation of $6.41 per share. Google’s stock declined around 3% in the after-market hours as a reaction to the results. Through a year-over-year comparison, Google’s revenue increased from $13 billion in Q1 2013 to $15.4 billion in Q1 2014, an increase of 19%. This increase was driven by a 26% increase in paid clicks and a 9% decline in aggregate cost-per-click. But expenses grew faster, at 23%, so net income increased at a slower rate, from $3.53 billion to $3.65 billion.

As the above chart shows, Google’s sites showed strong growth, and its revenue was up 21% year-over-year from about $8.64 billion to $10.47 billion, while the Network revenue increased only 4%, from about $3.26 billion to $3.40 billion. However, Google’s Other revenue showed even better growth of 48% year-over-year from $1.05 billion to $1.55 billion, which was primarily driven by growth in digital sales of apps and content in the Play Store as well as Chromecast sales. 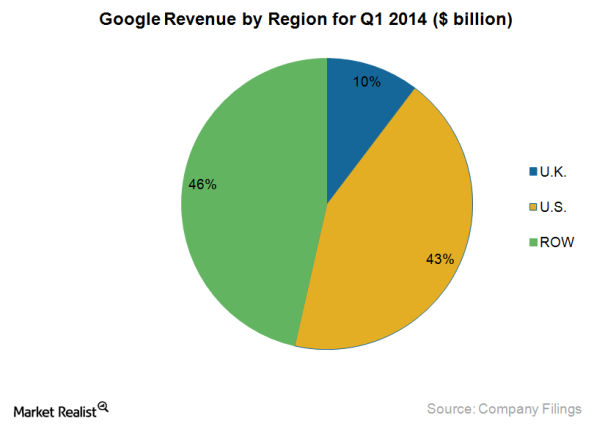 Google announced its earnings a day after Yahoo (YHOO) announced its Q1 earnings. Yahoo’s results were slightly better than expectation, as we discussed in the Market Realist series “Yahoo sees better-than-expected Q1 results and signs of revival.” However, Google’s main challenges in the Internet advertising market are Facebook (FB), Twitter (TWTR), and Amazon (AMZN), which are showing faster growth in this market than Google, according to eMarketer.