The definition of “liquefied petroleum gas” or “LPG” can vary depending on context, but it’s commonly used to refer to the hydrocarbons propane and butane. Propane (C3H8) and butane (C4H10) are hydrocarbons often found as part of a raw natural gas stream from natural gas wells, and they’re also produced during the refining process for crude oil. Propane is used for a range of applications, including home heating, transportation fuel, and petrochemical feedstock. Butane is used in refining processes for gasoline blending and also as petrochemical feedstock.

The oil and gas drilling boom in the U.S. has increased the production of natural gas liquids, as they’re often produced when natural gas and oil are produced. “Natural gas liquids” is a term used to describe a suite of hydrocarbons including ethane, propane, butane, and pentane. While the supply of NGLs has increased, there have been limited opportunities in the U.S. to take advantage of the increased supply, which has caused the prices of some NGLs to be depressed. For example, propane prices fell from ~$1.60 per gallon in September 2011 to as low ~$0.70 per gallon in June 2012. Propane had traditionally correlated to movements in crude oil, but during the same period, crude oil traded from ~$88 per barrel to ~$83 per barrel (note there are 42 gallons in a barrel), a much less pronounced decline. Butane supply has increased in smaller quantities than propane, so its price has been less affected. 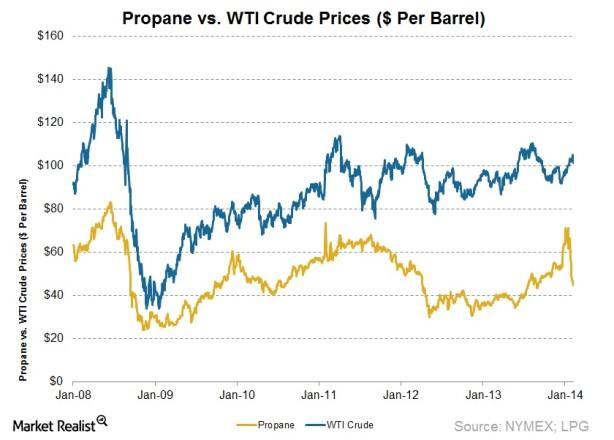 The increased supply of domestic propane has caused a price disparity between U.S. propane and international propane. This is because domestic propane production has continued to grow and despite a growing amount of propane exports, export capacity has been limited by a lack of infrastructure. However, this price disparity provides an economic incentive to build the necessary infrastructure to export propane.

The U.S. Energy Information Administration also noted in its latest Annual Energy Outlook (2013), “Notwithstanding the efforts to encourage the use of propane as a fuel in the United States, and despite current low prices, opportunities to expand the market for propane in uses other than as feedstock are limited. Therefore, producers, gas processors, and fractionators are looking for a growing export outlet for both ethane and liquefied petroleum gases.” Export capacity is currently being expanded on the U.S. Gulf Coast by Targa Resources (NGLS) and Enterprise Products (EPD), which we’ll discuss in the following parts of this series.