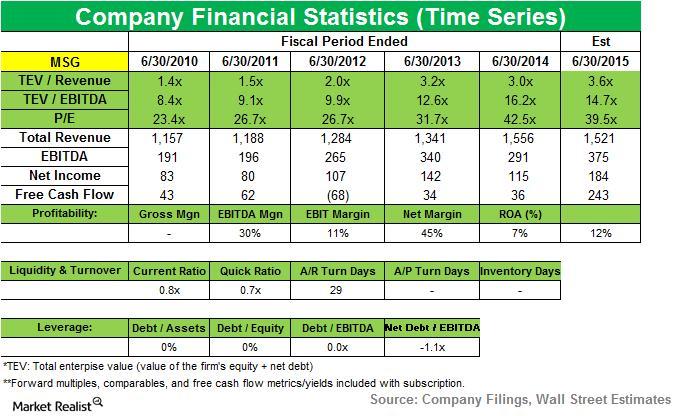 The filing says the fund owns an activist stake of 9.36% in Madison Square. The fund expressed its interest in engaging with the company’s board of directors and management to discuss the creation of long-term value for shareholders.

About The Madison Square Garden Company

Madison Square is made up of three business segments—MSG Sports, MSG Media, and MSG Entertainment.

MSG Media is a leader in production and content development for multiple distribution platforms, including content originating from the company’s venues. MSG Media’s television networks consist of regional sports networks, MSG Network, and MSG+, collectively referred to as MSG Networks.

MSG Entertainment also presents or hosts other live entertainment events such as concerts, family shows, and special events in the company’s diverse collection of venues. These venues include Madison Square Garden, The Theater at Madison Square Garden, Radio City Music Hall, the Beacon Theatre, the Forum in Inglewood, California, The Chicago Theatre, and the Wang Theatre in Boston, Massachusetts.

In its latest amended filing to SEC, JAT Capital revealed it has an activist stake equal to 9.36% of the company’s shares outstanding. It upped its stake to 5.96 million shares, pushing the company’s management harder to consider strategic alternatives such as splitting off into two segments.

Madison Square reported fiscal 2015 1Q revenue of approximately $241.7 million, up 12% compared to the same quarter last year. The increase was primarily due to higher revenues from the company’s MSG Entertainment and MSG Sports segments. The MSG Media segment’s revenue decreased, reflecting the absence of revenues for the Fuse network. The company completed the sale of the network on July 1, 2014.

The company’s CEO said, “Investors favor companies with greater strategic focus on their core businesses. We are exploring the opportunity to improve upon the excellent shareholder return created since MSG’s spin-off over four years ago by separating our business into two companies, each with its own distinct value proposition for investors. The live entertainment company would be a premier live event and venue management company with expertise in areas such as productions and other entertainment content, marketing, sales, and event operations. The sports and media company would be a leading company that fields championship caliber sports teams and has the rights to distribute sports content on multiple media platforms. The first company would capitalize on significant opportunities to grow rapidly within the changing entertainment landscape. The second would enjoy steady growth and high cash flow that we expect will result in capital returns to shareholders.”

Madison Square said it plans to separate live Entertainment businesses from Sports and Media businesses, including the New York Knicks basketball team and New York Rangers hockey team, to create two distinct public companies. Also, the company’s board decided to buy back up to $500 million in Class A shares and nominated two new independent directors for election—Nelson Peltz, co-founder of Trian Fund Management LP, and Scott Sperling, co-president at private-equity firm Thomas H. Lee Partners. After the announcement on October 27th, Madison Square’s shares shot up $10.89, or 16.6%, to $76.67 in after-hours trading.

In the next segment of this series, we’ll review JAT Capital’s position increase in CBS Corporation.