Morgan Stanley (MS) has expanded its operations at a CAGR (compounded annual growth rate) of 11% over the past three years. The company registered total revenues of $32.5 billion in 2014.

In the same year, investment banking, trading, and asset management contributed approximately 75% of Morgan Stanley’s total revenues, compared to 68% in 2012. In 2012, the company’s net interest income also increased to $1.7 billion, compared to its net interest loss of $205 million in 2010. 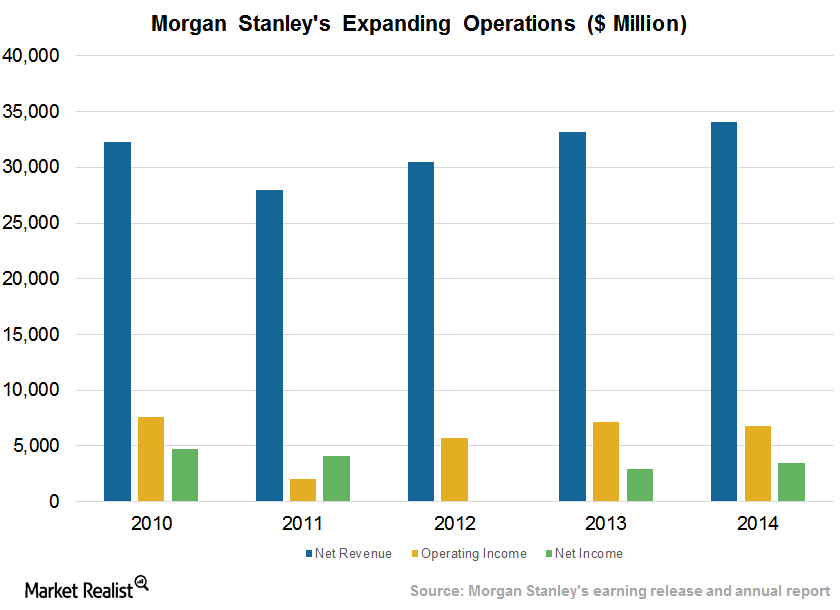 Morgan Stanley’s asset management business has seen marginal growth on increased competition from specialized alternative asset managers and from nominal returns in various funds managed. However, the company’s trading activities have expanded at an even faster pace, with total revenues of $9.4 billion in 2014, compared to $7.0 in 2012.

The company’s expansion has been a result of macro factors, such as increased volatility, organic expansion, and investment into technology.

Morgan Stanley’s banking products, such as its loans to corporates and retail clientele, fetch interest income as well. The company’s loans and deposits stood at $67 billion and $133 billion, respectively, on December 31, 2014. Its net interest income for 2014 stood at $1.74 billion, compared to $772 million in 2010.

The company’s growth in net interest income has been mainly due to higher lending and profitable realizations in investment securities. The company is deploying deposits in asset classes or offerings, which fetches higher interest rates.

For a look at Morgan Stanley’s equity, check out the next part of this series.