In 2014, Actavis (ACT) had total debt and capital leases totaling $15,543.7 million, up by 72% from the prior year. For the past five years, Actavis’s debt has been on an increasing trend, primarily due to a large number of acquisitions made by the company. 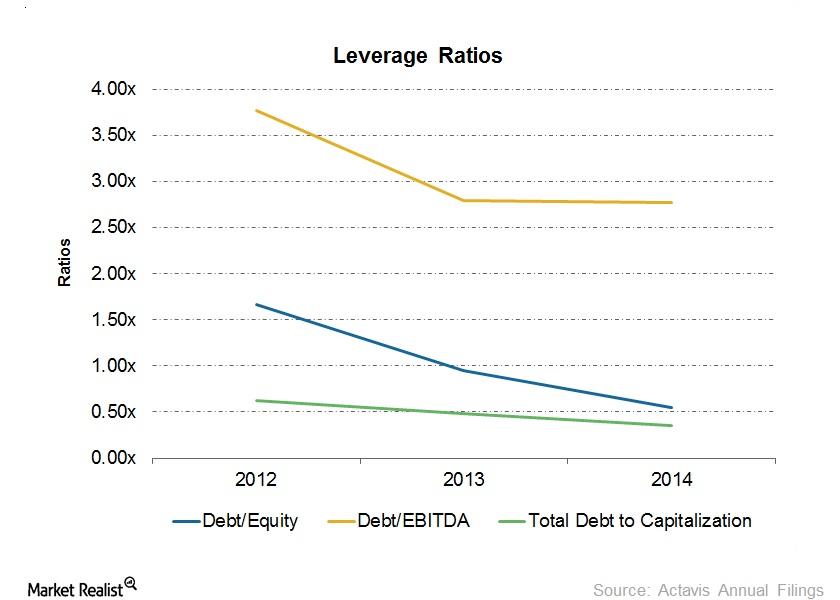 Plus, Actavis recently raised $21 billion through offering senior secured notes. The company expects to use the net proceeds to finance the cash portion of the merger consideration for the acquisition of Allergan. This will increase Actavis’s total debt to $44,150.2 million. According to Fitch, this will also increase Actavis’s estimated pro forma leverage ratio (or debt/EBITDA, or earnings before interest, tax, depreciation, and amortization) to 4.80x from 2.77x, as reported by the company.

If Actavis is not able to reduce its leverage ratio to below 3.5x–4.0x within 12–18 months after closing the deal, then its investment rating could be downgraded. A leverage ratio maintained at or below 3.0x could result in a rating upgrade.

Currently, both Moody’s and Fitch have maintained their investment grade ratings for Actavis, with ratings of Baa3 and BBB-, respectively. This reflects a stable outlook for the company. This affirmation is due to the following key aspects of the combined business:

Actavis and its peers

The profitability of these companies can be capitalized by investing in ETFs like the First Trust Health Care AlphaDEX Fund (FXH) and the iShares US Healthcare ETF (IYH).