The Refinance Index dropped 1.9% (from 1,621 to 1,590) even though rates finally fell a handful of basis points. Since mid-2013, refinances have been dropping like a stone as people with home equity have already refinanced and the ones left with high rates are underwater.

The Mortgage Bankers Association (or MBA) reported that the share of refinance applications are flat at 62.9%. This bond market rally has caught many by surprise, but it could be a pleasant surprise for the originators who have been having a horrendous year. Slowing refinance activity has been a negative for originators like PennyMac Mortgage Investment Trust (PMT), Nationstar Mortgage Holdings (NSM), and Redwood Trust (RWT). But how many people are left to refinance? It could be more than thought, as home price appreciation and easier lending standards will allow those who were unable to participate in the refinance wave last time around to get their chance. 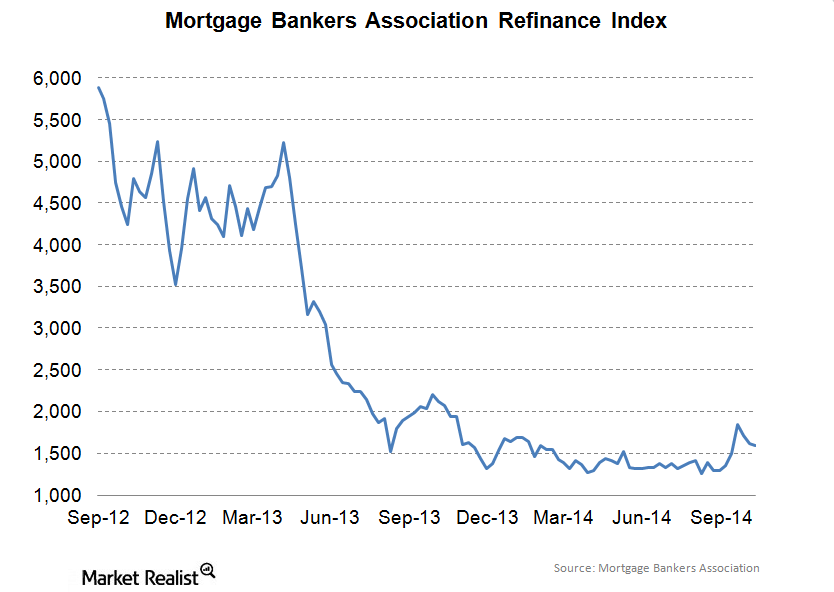 Refinancing activity affects prepayment speeds, which are a critical driver of mortgage real estate investment trust (or REIT) returns. Prepayment speeds occur because homeowners are allowed to pay off their mortgages early, without penalty, and when interest rates fall, those who can refinance at a lower rate do. This is good for homeowners, but it isn’t necessarily good for mortgage lenders, especially REITs.

That said, the increase in rates has basically put prepayment worries on the back burner for REITs. The lack of a reaction in the refinance index on the back of a drop in rates could mean we’re finally seeing prepayment burnout. This would be good news for REITs.