Alpha Natural Resources (ANRZ) hasn’t raised any new debt in 2Q15. As we discussed in the first part of this series, the Wall Street Journal reported that “Alpha Natural Resources (ANRZ) is in talks to obtain financing for potential bankruptcy filing early next month.” However, the debt will not show up on the balance sheet at the end of 2Q15. So ANRZ’s debt position is largely expected to remain in line with the 1Q15 level. 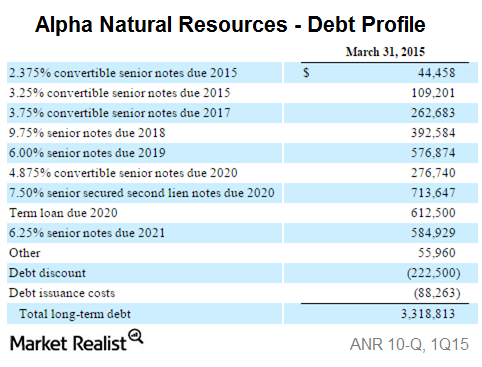 ANRZ had around $3.3 billion of debt on its books as of March 31, 2015. The company repurchased $593 million worth of unsecured notes using $117 million in cash, $214 million in fresh debt, and remaining through stock. The total debt was dropped by around $380 million due to the repurchase. This transaction is expected to help ANRZ save $21 million in annual interest costs.