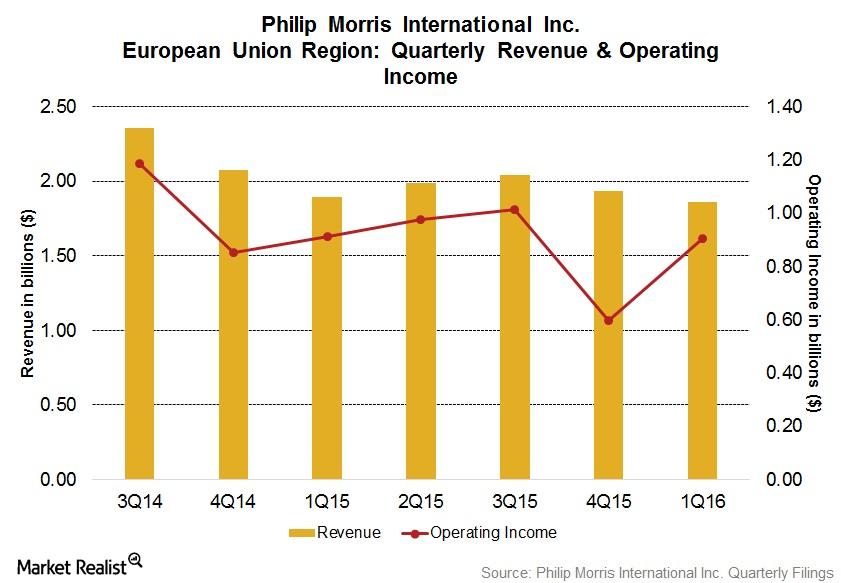 The EU region’s reported net revenue decreased 1.5% to $1.9 billion in 1Q16. The decrease was primarily due to unfavorable currency of $0.2 billion and the impact of acquisitions. However, excluding the negative impact of currencies, net revenue for the EU region increased 3.4%, driven by favorable pricing in Germany.

PM’s cigarette market share increased by 0.6 points to 38.7%, with gains notably in France, Germany, Poland, and Spain. It was partially offset by Italy and Portugal. Marlboro, L&M, and Chesterfield shipment volumes increased in the EU region in 1Q16. Southern Europe witnessed a decline in illicit trade, less out-switching for the fine-cut category, and a lower prevalence of e-vapor products in 1Q16.

For British American Tobacco (BTI), volume and market share were higher in Germany. It was driven by Lucky Strike and Pall Mall. Japan Tobacco’s (JAPAY) (JAPAF) GFB (global flagship brands) shipment volume increased 4.3%, reflecting growth in Germany, France, and Italy. Other companies such as Reynolds American (RAI) and Altria Group (MO) don’t have a presence outside the United States.

Philip Morris is focusing on the following new products:

These reflected higher market share growth in France and Poland.