The refinery utilization rate is the gross input divided by refineries’ operable refining capacities. US crude oil inventories have risen significantly since mid-2014. 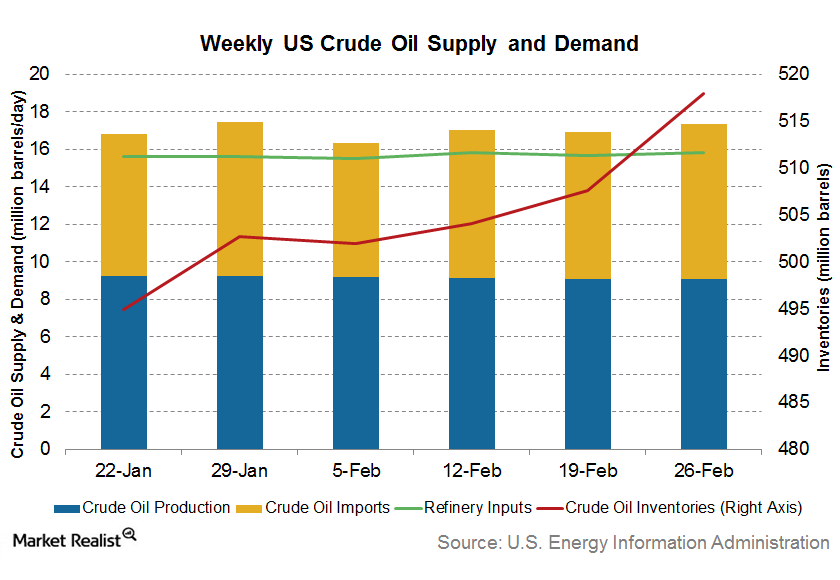 For the week ended February 26, US crude oil refinery inputs were 15.9 MMbpd (million barrels per day). The inputs to US refineries were less than the total crude oil production and imports. This might contribute to a rise in crude oil inventories. Crude oil supply and demand dynamics drive crude oil prices.

According to a study by the EIA (U.S. Energy Information Administration), if the projected crude oil production remains below 10.6 MMbpd over the next decade, lifting a ban on US crude oil exports may not make a major difference in crude oil prices.

However, the study shows that if domestic production in 2025 ranges between 11.7 MMbpd and 13.6 MMbpd, lifting the ban might result in increased domestic production, higher crude oil exports, reduced product exports, and slightly lower gasoline prices in the United States.

On December 30, 2015, NuStar Energy (NS) and ConocoPhillips (COP) announced the loading of their first export cargoes of light crude oil since the export ban was lifted. NuStar Energy forms 0.62% of the Multi-Asset Diversified Income ETF (MDIV).

Lifting the ban on US crude oil exports could narrow the spread between WTI (West Texas Intermediate) and Brent crude oil prices. We’ll analyze this spread in the next part of this series. Narrowing of the WTI-Brent spread could benefit upstream MLPs such as Memorial Production Partners (MEMP) and Vanguard Natural Resources (VNR). At the same time, the EIA expects refining companies’ margins to be lower as the WTI-Brent spread narrows.