Previously in the series, we discussed analysts’ expectations for Oracle’s (ORCL) fiscal 4Q16 results, which the company is scheduled to announce on June 15, 2016. Like its peers Microsoft (MSFT), IBM (IBM), and Google (GOOG) (GOOGL) in the cloud space, Oracle is trying to transition its business towards the cloud space. 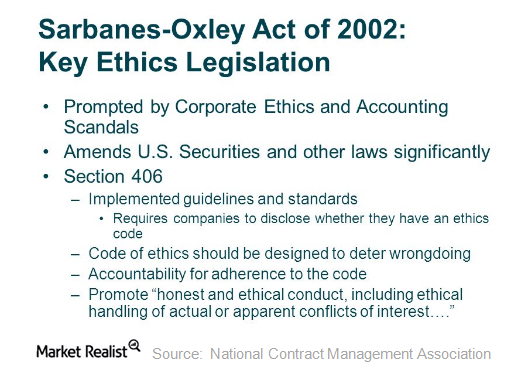 In early June 2016, Oracle garnered a lot of negative publicity when former employee Svetlana Blackburn, a senior finance manager, filed a lawsuit claiming that Oracle had inappropriately boosted revenues in its cloud services segment. Her lawsuit claimed that she was being pushed by Oracle “to fit square data into round holes, in an effort to bolster Oracle Cloud Services financial reports that would be paraded before company leadership as well as the investing public.”

Blackburn stated that she was fired due to her non-cooperation in inflating cloud revenues. Oracle, in retaliation, stated, “This former employee worked at Oracle for less than a year and did not work in the accounting group. She was terminated for poor performance and we intend to sue her for malicious prosecution.”

Blackburn’s lawsuit is based on the Sarbanes-Oxley Act. It’s a federal law that was signed in 2002 to enhance transparency in corporate governance practices and curtail accounting shenanigans and misrepresentations.

Not long back, Oracle lost its lawsuit with Google too. HP Enterprise (HPE) also sued Oracle for reneging on its contract for Itanium software. We’ll look more into these lawsuits in a later part of the series.

Investors who wish to gain exposure to Oracle could consider investing in the Technology Select Sector SPDR Fund (XLK). While XLK invests ~3% of its holdings in Oracle, it also has 31% exposure to application software.