As of April 8, 2016, American Airlines Group (AAL) was valued at 4.48x its forward EV-to-EBITDA (enterprise value to earnings before interest, taxes, depreciation, and amortization) ratio. This is slightly lower than AAL’s average valuation post-merger (December 2013) of 4.56x. It’s equal to the industry median valuation of 4.48x. 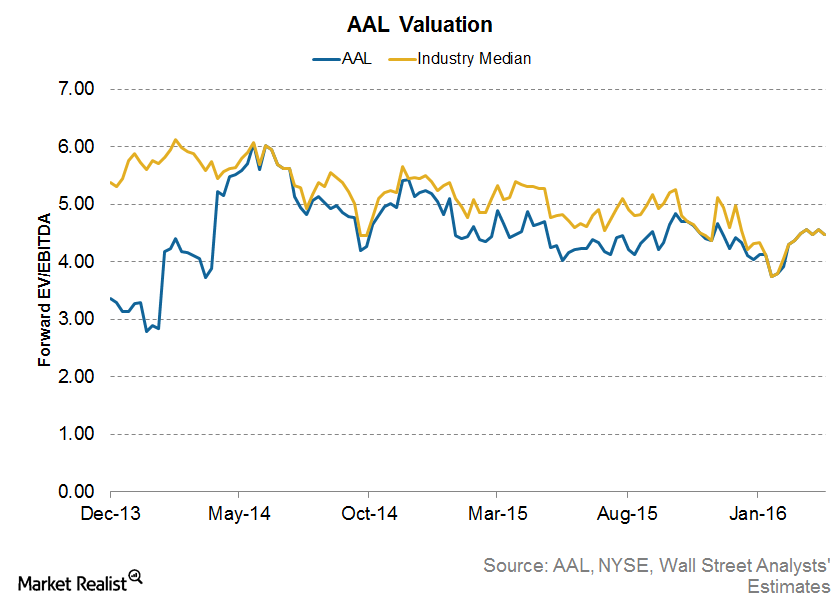 Markets are expecting AAL’s EBITDA to grow by 9% in the next four quarters. During the same period, markets have the following EBITDA growth expectations:

AAL’s higher-than-industry leverage, its low utilization, and its low yields seem to be behind its low valuation. Its recent emergence from bankruptcy has also made it a riskier stock compared to other players in the industry.

Investors should also keep an eye on the industry situation because industry fundamentals also impact the company’s valuation multiple. For example, a significant and unexpected rise in fuel can be a major threat to all airlines. If companies can’t pass these costs on to consumers, it can send valuations tumbling down. On the other hand, if fuel decreases further, it could expand margins and increase valuation multiples.