Mead Johnson Nutrition (MJN) invests very little in R&D (research and development)—only 2.5% of its sales. Generally speaking, if a company like Mead Johnson wants to continue to support innovations, it has to spend more on R&D. By comparison, Mead Johnson’s biggest peers in pediatric nutrition (XLP)—Nestlé (NSRGY) and Abbott Laboratories (ABT)—spent 1.7% and 6.6%, respectively, on R&D. 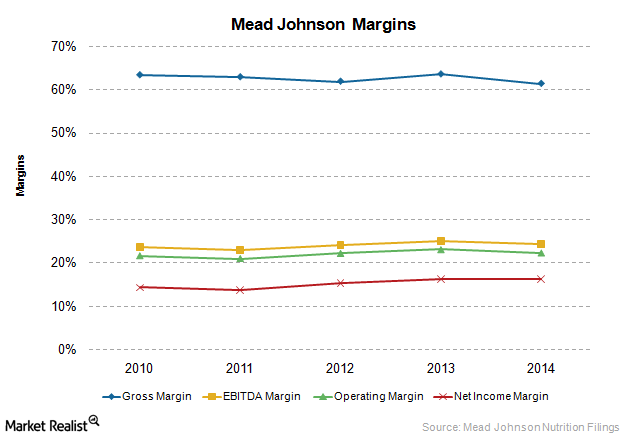 Mead Johnson generates high gross margins, but it has so far not been able to pull its operating margin to a comparable level. MJN focuses on productivity with fixed-cost productivity programs within dairy and other raw materials. The company spends about 16% on advertising and promotion, and it expects to lower the advertising and promotion expenses as a percentage of sales by 50 to 100 basis points over the three years.

On October 22, 2015, Standard & Poor’s rating service lowered Mead Johnson’s corporate rating for Mead Johnson from “BBB+” to “BBB.” According to Standard & Poor’s, Mead Johnson has a less conservative financial policy. It estimates that the company’s debt-to-EBITDA (earnings before interest, tax, depreciation, and amortization) will increase by between 1.75x and 2x, as its EBITDA is forecasted to decline of low- to mid-single digits.

Mead Johnson lost its market share in China due to the slow adoption to the shift in Chinese consumers’ demands for baby stores and e-commerce. The company has only one-third of distribution in baby stores, but it generated 31.3% of its sales from China in fiscal 2014, which ended for the company on December 31, 2014. By comparison, Mead Johnson’s competitors Danone and Nestlé are more diversified, with broad portfolios and less exposure to China.

That said, the Chinese government has been encouraging Chinese mothers to breastfeed their children, which could have a negative impact on Mead Johnson’s future growth in China.

In the next and final part of this series, we’ll do a deeper analysis of Mead Johnson’s plans for China.