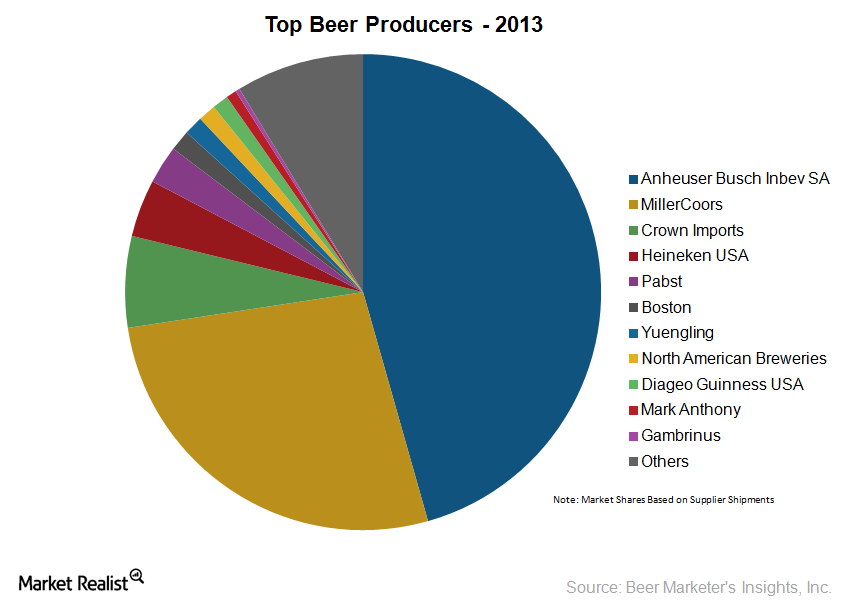 The US beer industry is a highly concentrated industry since a few large firms occupy a large market share. According to Beer Marketer’s Insights, Inc., the top four beer producers in the United States hold more than 80% of the market share based on industry shipments. According to the U.S. Economic Census, the top four producers in the brewing industry control 89.5% of the market, and the top eight control 91.5%.

Based on the US beer industry shipments of 211.7 million barrels, Anheuser-Busch InBev led the beer industry in 2013 with a 45.6% market share. According to Beer Marketer’s Insights, MillerCoors, Crown Imports, and Heineken USA had a market share of 27.0%, 6.2%, and 3.9%, respectively. Crown Imports was acquired by Constellation Brands (STZ) in 2013. The iShares Core S&P 500 ETF (IVV) has 0.11% exposure to Constellation Brands.

Beer market leader Anheuser Busch Inbev generated $47.1 billion in revenue in 2014. The company has a strong portfolio of more than 200 beer brands, including 16 brands that generate more than $1 billion in retail sales. The company owns leading brands around the globe, including Bud Light in the United States, Harbin in China, Skol in Brazil, Jupiler in Belgium, and Quilmes in Argentina.

The second largest company, MillerCoors, was formed as a result of the 2007 joint venture between SABMiller (SBMRY) (SAB.L) and Molson Coors. MillerCoors generated net sales of $7.8 billion in 2014. There have been many mergers and acquisitions in the past few years that have consolidated the beer industry.