Debt was high at $1.5 billion, but it was still manageable. The company generated ample cash. 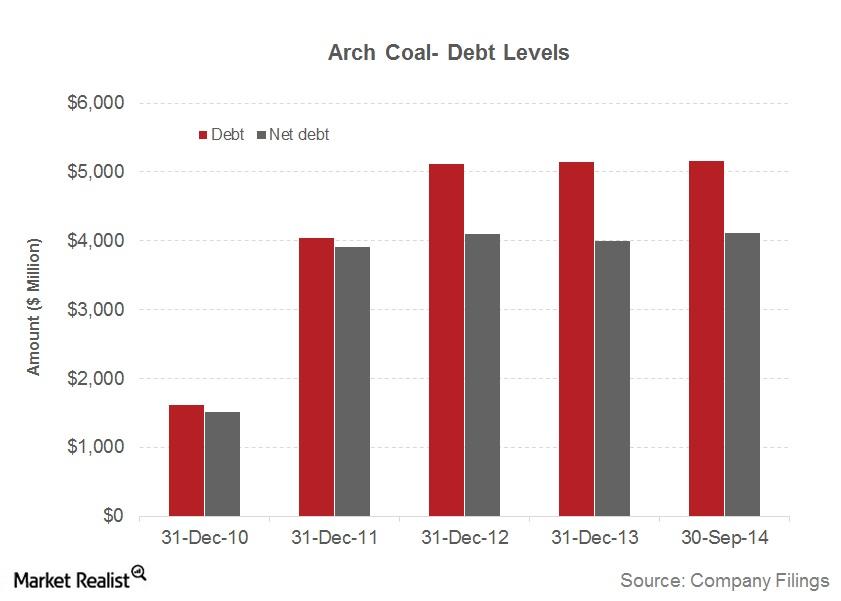 Just like Alpha Natural Resources (ANR), Walter Energy (WLT), and Peabody Energy (BTU), Arch Coal couldn’t resist the urge for inorganic growth when coal prices were rising. On June 15, 2011, the company completed its acquisition of International Coal Group (or ICG) for $3.4 billion. It funded the deal through fresh equity of $1.3 billion and additional debt of $2.1 billion.

The acquisition helped the company expand its met coal portfolio significantly. As a result of the acquisition, met coal shipments increased to 7.4 million tons in 2011 from 5.5 million in 2010.

Soon after the acquisition, met coal prices dropped. At the time of the ICG acquisition, the company had expected to ship 15 million tons of met coal by the end of 2012. However, with a drop in prices and oversupply in the market, the company could ship just half of it (7.5 million tons) during the year. This was a marginal increase from 2011’s met coal shipments.

The company’s debt increased to $3.7 billion at the end of 2011 and, further, to $5.2 billion at the end of 3Q 2014. Arch Coal borrowed $2 billion to fund the acquisition and kept borrowing more to build liquidity to survive the downturn. For more details on the company’s current financial position, see Why you shouldn’t read too much into Arch Coal’s 3Q14 cash flows.